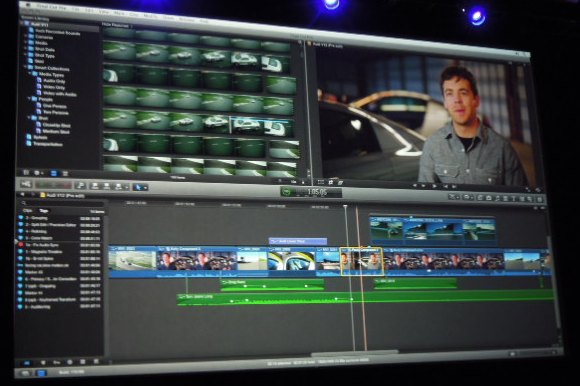 The new update deliverss multicam editing “that automatically syncs up to 64 angles of video and photos,” advanced chroma keying for handling complex adjustments right in the app and enhanced XML for a richer interchange with third party apps and plug-ins.

Also available as is a new collection of tools for editing multicam projects, helping to automatically sync clips from your video cameras using audio waveforms, time and date, or timecodes. This allows users to create “a Multicam Clip with up to 64 angles of video, which can include mixed formats, frame sizes and frame rates.”

The powerful Angle Editor allows you to dive into your Multicam Clip to make precise adjustments, and the Angle Viewer lets you play back multiple angles at the same time and seamlessly cut between them.

Final Cut Pro X builds upon its robust, one-step chroma key with the addition of advanced controls including color sampling, edge adjustment and light wrap. You can tackle complex keying challenges right in Final Cut Pro X, without having to export to a motion graphics application, and view your results instantly with realtime playback.

The Broadcast monitoring in Final Cut Pro X launches as a beta feature but it will enable users to connect to waveform displays, vectorscopes and high-quality monitors so that it can meet broadcast specifications.

In June 2011, the company released its popular video-editing tool Final Cut Pro X on the Mac App Store with a $299.99/£179.99 price tag. With users excited to be able to download the new software in just a few clicks, the app quickly rocketed to the top of the Mac App Store charts.

However, Apple’s glory was short-lived after it soon became apparent that the new version of Final Cut Pro X wasn’t meeting user expectations; support for older file-types was no longer available, functions became difficult to find and audio markers no longer worked “the way they used to”. This led to many customers leaving 1-star ratings and lengthy negative reviews on the Mac App Store – it even got blasted by Conan O’Brien.

The company closed comments on the Mac App Store and began acting on reviews, issuing refunds to those who had filed an official request using Apple’s Mac App Store Customer Service form.

The update is available on the Mac App Store from today.