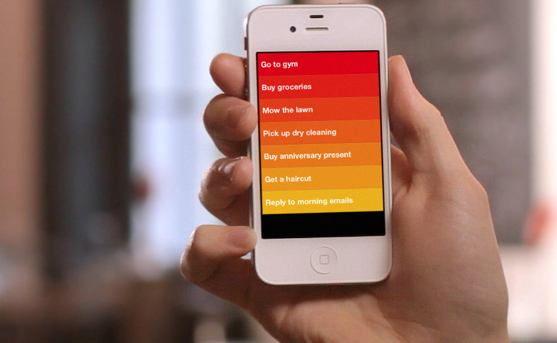 Clear is a new app that was just announced along with a new studio called Impending. It’s been in development for a while and isn’t yet launched, but has been revealed by the studio partners Phill Ryu and David Lanham.

Ryu may be familiar as the guy behind the MacHeist series of bundle sales for Mac and then iPhone and iPad software. Lanham is a designer whose work can be seen on The Iconfactory.  Between them they have an impressive pedigree including MacHeist, The Heist, Classics and Twitterrific.

For the new studio’s first project it chose a humble list app that it is calling Clear. Impending has engaged in a grade-A teamup for this first app including Dan Counsell, who runs Realmac Software, and Milen Dzhumerov.

Clear is, at its core, a list app. It allows you to create, check off and delete items in simple color coded lists. But that’s doing it a major disservice as the interactive elements of clear are absolutely incredible. Watch the video below to see what I mean:

Screenshots of this app do nothing to sell it, but the video above should show you why I think that its so special. I’ve had a chance to play with the app and I can tell you that it’s just as slick as it looks. Whether you’re a casual note jotter or a serious list maker

The lack of any sort of interaction buttons or ‘UI’ is a hard trick to pull off, but Impending has managed it. Somehow using the apps own components as interaction points seems absolutely made for the iPhone. It’s actually ruined me for other list apps.

RealMac has a signup form on its site that should alert you when the app is available and I highly recommend that you do so. It’s a prime example of small development houses making really great software.

Read next: After some safety tweaks, Google+ opens up its doors to teens