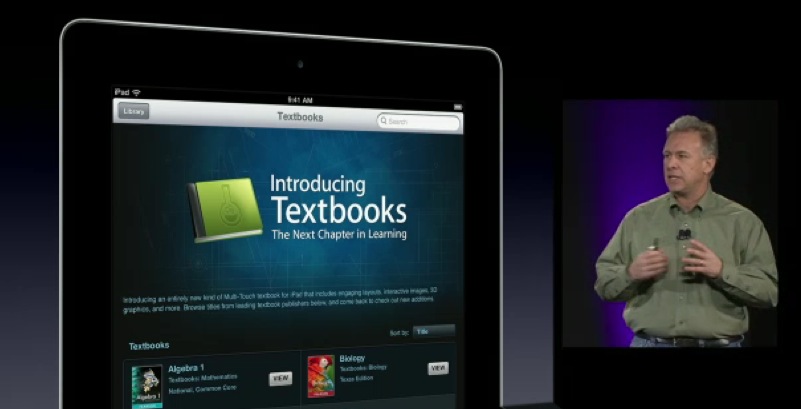 The dust is just beginning to settle from Apple’s education event in New York City this morning and many are pondering the impact which its new textbooks, iBooks Author tool and iTunes U app will have on the future of learning.

Heavy discussion in the wake of an Apple event isn’t unusual, but this one is somewhat unique in that it was presaged by an uncharacteristically detailed admission from founder Steve Jobs himself. The preview of what Apple was going to announce today came on Page 509 (Kindle) of Walter Isaacson’s biography of Jobs.

In this section of the book, Isaacson was describing a dinner in 2010 at which Jobs discussed what he saw as the future of textbooks with News Corp.’s Rupert Murdoch. The section was brief, but outlined his basic vision very well. It’s quite interesting to see how close, and how far away, Apple’s announcements today are from that vision.

“Jobs was somewhat dismissive about technology transforming education.” It may have been one of his classic feints, in which he attempted to put competitors off the scent when it came to future Apple plans, but Jobs was specifically blasé about education transformation via technology.

At the event today, Apple’s Phil Schiller and Eddy Cue waxed poetic about how the company plans to help transform education using the iPad and apps like iTunes U and iBooks Author. It was a very decidedly ‘pro-technology-in-education’ presentation, in which tech was positioned as the savior of learning.

Jobs thought that paper textbook business would be ‘blown away’ by digital learning. Isaacson specifically mentions the ‘business’ of textbooks here, rather than the fact that textbooks exist at all. This may have been a trick of wording, but if Jobs was referring to the business aspects specifically, then he was accurate.

Whatever future there is for the paper textbook, Apple and its major publishing partners like Pearson, McGraw Hill and Houghton Mifflin Harcourt, see it as time limited. At least one of the publishers, McGraw Hill, admitted that its business would be altered by selling directly to the students at a lower cost, but making it up on volume with non-transferable books that would need to be purchased by every student, every year.

“Jobs had his sights set on textbooks as the next business he wanted to transform.” Jobs said that it was an $8B industry that was ‘ripe for digital destruction’. He specifically referred to the fact that schools didn’t have lockers and kids had to carry heavy backpacks full of books around.

This point was brought up several times during today’s presentation. Kids would have access to the eminently more portable iPad instead of a bag full of heavy books. No mention was made of ‘destroying’ the textbook industry, which makes sense as Apple is currently partnering with the publishers who make 90% of the textbooks in US schools.

Partnering with Pearson. Jobs wanted to hire ‘great’ writers to create digital versions and make them a ‘feature of the iPad’. If by ‘hire great writers’ he meant, ‘partner with the biggest publishing houses who employ them’, then this is exactly what Apple did. The writers are not independent, but tied to publishing houses with which Apple made deals.

Isaacson actually specifically mentioned Jobs meeting with Pearson Education about partnering with Apple to offer digital textbooks. Pearson was one of the partners announced today and was heavily featured in Apple’s video about the new initiative.

McGraw-Hill CEO Terry McGraw told Peter Kafka of All Things D that the $15 mark was ‘pilot pricing’, which would indicate that it hoped to raise the price at some point. Apple’s Eddy Cue had a completely different take on it, telling Kafka that “This isn’t pilot pricing, all of our books will be $14.99.”

That’s an interesting conflict, and one that could definitely become an issue, especially if the publishers don’t make up the difference in pricing on volume the way that they think they are.

Textbook certification and crappy state-level economy.  “The process by which states certify textbooks is corrupt,” Jobs said at the dinner. “But if we can make the textbooks free, and they come with the iPad, then they don’t have to be certified. The crappy economy at the state level will last for a decade, and we can give them an opportunity to circumvent that whole process and save money.”

Apple hasn’t clarified what the process will be to certify these textbooks for use in schools, but as the publishers are charging for them it seems clear that they will have to go through some sort of vetting. The loophole that Jobs hoped to exploit by making the books free does not apply here.

The crappy economy definitely is still a major issue for schools, but with this system, the burden of cost is being pushed to the students. There is a variety of ways that schools could handle this. Buying in bulk and distributing the textbooks to students via a redemption code is one possibility. Codes were mentioned specifically by Schiller as one way that schools could give students books.

There is also a possibility of an income-based distribution system that would ensure that children who don’t have the money to pay for these digital books be offered copies on a case-by-case basis.

So today’s announcements come close to what Jobs envisioned for the future of textbooks, but still fall short in some areas. Of course, there was always going to be a delta between what he wanted to happen and what the realities of the educational system are. It was just a matter of how big that gap was going to be.

And some very big questions are still unanswered, like that of who will be buying the iPads to display these digital books?  The schools are the likeliest candidates, with the possibility of partially subsidized or heavily discounted iPads being offered to educational institutions. This is a program that Apple already offers to corporations and schools, with discounts up to 35% off or more.

Jobs didn’t have anything to say about these issues, at least publicly or to his biographer, so it will be interesting to see how Apple solves this issue.