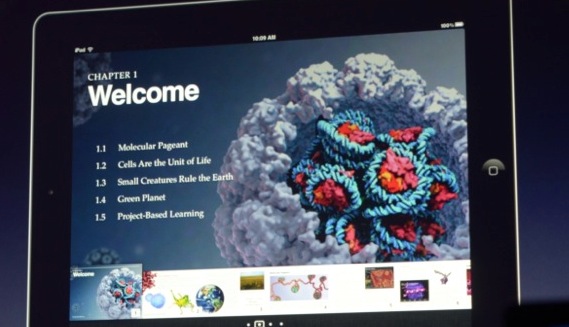 Among industrialized nations, the US has fallen well behind, coming in at 17th in reading, 21st in math and 23rd in the sciences, globally. “No one company can fix it all,” said Apple’s Head of Marketing Phil Schiller. “One place we think we can help is in student engagement.”

Today, at an education-focused event in New York City’s Guggenheim Museum, Apple announced the debut of iBooks 2, a “new textbook experience for the iPad.”

Traditional textbooks are expensive, physically cumbersome and prone to becoming obsolete. Whereas an iPad is interactive, searchable and can be updated. But while the iPad is portable, durable and searchable, it lacks content. To that end, Apple’s iBooks 2 will be its “new textbook experience for the iPad.”

Today at the event, Schiller told the audience that “Kids are getting smarter thanks to their tablets, whether they’re older and studying for finals or​ kids playing a Dora game.”

The iPad textbooks demonstrated at the event were highly interactive with 3D models, videos and manipulatable elements. Rotating the book vertically gives you a reflowed layout that emphasizes text, versus horizontally where the emphasis is images and interaction.

You can pinch the book to zip in and out of interactive media and jump to the table of contents. A linked index gives reference notes and a bibliography, and an inline dictionary aids in defining terms.

Visual and  interactive Q&A centers can be found at the end of chapters that allow students to test their knowledge. iBooks 2 also includes built-in highlighting and note taking features. “Your finger is always a highlighter,” Schiller told the audience.

Once you’ve highlighted and made notes, they will appear in a collection at the end of the book in a collated section. “I don’t think there’s ever been a textbook that made it this easy to be a good student,” said Schiller.

The books will be featured in a new Textbook section on the iBookstore and the ones that are currently up on the store are running 1GB+ in size, a good reason to buy your kids an iPad model with lots of storage. They will cover grades 7-12 with current examples running around $15.

Prior to announcing iBooks2, Schiller announced that there are currently 1.5 million iPads in use in education and over 20,000 education and learning applications built specifically for the iPad. iBooks 2 is, of course, available free today for the iPad, you can download it on the App Store.

Check out all of our posts from today’s Apple Education event here.

Read next: Apple: 1.5 million iPads are used in educational programs, with over 20,000 education apps