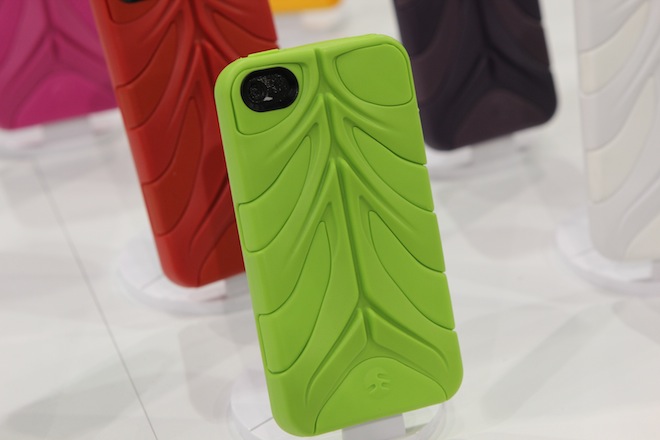 If there was one product that was on display in insane volume at this year’s CES, it was iPhone and iPad cases and accessories. The range in quality and practicality was pretty staggering this year and we found plenty of examples that you’ve got to see.

Some of these will be options that you’re going to want to add to your list for the coming year, as they’re gorgeous or great in their own way. Some of the others are, well, not. We even saw some that made us cringe they were so bad and we’ve packaged them all here for you.

The Switcheasy Melt, seen above, was one of my favorites of the show. It wasn’t super slim or feature-rich, but man was it just plain delectable. The molded glossy plastic along with the soft-touch undercarriage was super neat. Not for everyone, I’m sure, but for those bored of plain black cases or ‘tech’ designs, a nice alternative.

The company was also showing off its Avant-Garde range, seen above. These took the molding a step further with gears, castles and even wood planking molded into the backs of the cases. Once again, out of the ordinary but nifty.

One of the brands which was new to our eyes was Ozaki. These folks have some really cool cases with some useful features. Among them were a screwless metal case with a built in tripod mount and the model above, which had a lanyard clip built into the side of it. This hangs it from your neck like a point and shoot camera. The strap detaches from the case when you don’t need it and is sold as a separate item. Both of those cases run $50.

Ozaki also had these whimsical little passive sound amplifiers in various designs. The sound from your docked iPhone travels down a tunnel and out through the mouth on the left. A good desk accessory for listening to music at work perhaps.

Next up is perennial case favorite Incipio. It was showing off a new design of its Offgrid battery pack called Offgrid Pro. It runs $99 and comes with two removable 1700mAh batteries that can be swapped out for 3 days worth of charging. I love the way that the battery is tucked inside the case instead of strapped to the back of it meaning that you don’t have to worry about it getting detached or the mounting getting damaged.

There was some other cool stuff at the Incipio booth, but among the best was these Stanley branded cases. They were familiar designs but the branding should appeal to the contractor or handyman in your life, very well executed partnership on this these. Most of these Incipio designs should be shipping in February, with price TBD.

This next gem falls rather a lot into the crap category, rather than the cool, but I had to include them just for ‘wow’ factor. These are 3D, chrome, jewelled, sports branded iPhone and iPad cases. That’s two dimensions and one material too many for any self respecting sports fan. The iPhone cases are especially noxious, adding crsystals and way too many team colors. Ugh.

In another entry from the ‘um, err’ category is this real gold and snakeskin iPhone case which runs about $150. We’re not sure what is less practical here, the soft gold exterior of the casing, which is sure to invite theft and offer little protection, or the snakeskin, which only stretches to two of these per snake.

I shudder to think about what else you’re wearing if this seems like the perfect iPhone case for you. No, don’t tell me, ignorance is bliss.

I did rather like this tough case from Case Mate though. It’s called the Phantom, runs $50 and is available now. It’s a rather more attractive take on the rough and tumble cases from Ballistic or Otterbox and features a hard interior shell and a thicker rubberized exterior. Flaps cover the ports and switches and it appears to be a decent stylish option for people who want more protection without having to carry around a giant black, yellow or orange beast.

The Geneva booth was a good visit, as we got to listen to its new $3,000 XXL home theater and sound system, as well as the award-winning Model M but the real star of the booth for us was the XS, a hard-case toting  speaker that had crisp clean sound. The speaker features two tweeters and a woofer and a 3.5mm cable as well as an FM radio.

The controls are nicely hidden behind a glossy piano black, red or white casing and shine through with a tap of the control pannel. A very nice touch on a device this small.

The external hard case makes for easy transport without having to worry about damaging it. Think a Jawbone Jambox in a hard clamshell, plus a few features. At $249, it’s a bit pricier than a Jambox, but the extra features seem worth the $50 extra bucks.

This next item isn’t actually for sale yet. It’s a prototype of a dock from case maker Element. Element is famous for its machined aluminum cases in various configurations and coatings. The distributor running the booth pulled it out of a cabinet to show us, informing us that it was still a month or more from a finished configuration, but we liked what we saw already.

The dock was heavy for one, which is one of the things that annoys us the most about the Apple iPhone docks. There is no way that this thing was going anywhere when you dock or undock an iPhone from it.

There seemed to be a nice cavity underneath to allow a cord to wrap and enough space in the cradle to dock it with a bumper-sized case. The final design could change so we’ll withhold judgement until we see it, but I would keep your eye out for this if you’re unhappy with the docks on the market now.

It reminds us a bit of the Elevation dock from Kickstarter that we posted on, but should be available well before that is.

I use my iDapt 4-up charger constantly in the office and I’m a huge fan of its interchangeable shock-absorbant charging tips that allow you to plug a ton of different devices (5,000+ we were told) into the dock to charge.

At the show, iDapt was showing off two new products, one a prototype and one shipping in March, both using the new tip design.

The first was the Universal Speaker S1, a speaker dock and alarm clock that had two slots for devices to charge on top, USB connectivity, audio in and USB charging as well. The dock plays audio over Bluetooth streaming and features and upgrade port that iDapt can use to keep up with technologies like AirPlay without the user having to upgrade it.

The dock features two control panels, one touch sensitive panel hidden behind the black finish of the front panel and one on top so you don’t have to get on your knees to control it. There were also a set of analog dials across the top to control it.

The other item at the iDapt booth that seemed pretty cool was a the Universal Laptop Charger L1. This charges any device with an iDapt tip as well as any laptop. It seems like this could be a good road warrior addon for anyone with a bulky laptop power adapter and a phone charging power brick. It hits the market in March for $99.

The Sydnee, from Kanex, is a charging station for up to 4 iOS devices. It looks pretty great at first glance, with a clean design and some nice cable management. The dock comes with room for 4 iOS devices including iPads and iPhones. It will run $149 when it hits the market in April and comes with 3 shortened 30-pin cables to minimize the rats nest.

If you have regular length cables you can use the racetrack at the back to wind them up. Each charging port will also deliver a full 2.1 Amps, making all of them ‘full-speed’ iPad charging capable.

Finally, we have what we think will be our next backpack. It’s the Newt II Mono from Ogio and it impressed us on several levels. The wing that holds an iPhone close at hand, rather than at your back, the headphone channel in said wing. The overall slimness of the bag was also impressive.

If you were the recipient of a 2009 WWDC gift backpack, then you know what this bag will feel like on your back. If you weren’t, I can tell you that its nice and slim, but with ample room for up to a 13″ MacBook and an iPad. But an 11″ MacBook Air wouldn’t feel out of place either. We’ll be taking a closer look at this bag for sure, but it should definitely be on your list. It will retail for around $95 when it hits in February or March.

After plowing through nearly 100% of the show, these were what we saw as the gems of iOS device accessories. There were dozens of other pretty cool items that we wanted to get a hands-on with before we recommended or warned about, but we felt that this was the cream of the crop.

If you were at the show, or have seen another product launching that you think we should have had on the list, please do let us know in the comments below.