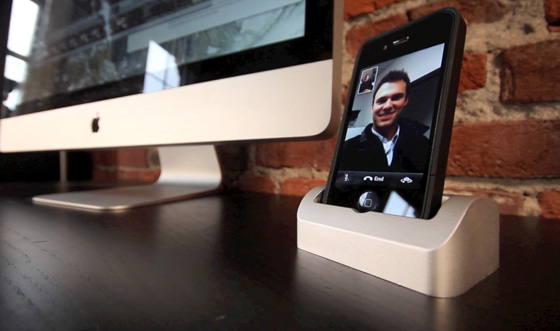 If you’re an iPhone user of any regularity, there’s a good chance that you might have tried out one of Apple’s docks at some point. If you have, then you probably know that they’re not exactly the best designed accessories ever to come out of Cupertino.

The Elevation Dock, a well-funded project on Kickstarter, looks like a massive improvement on the standard dock offerings from Apple.

The standard Apple docks are traditionally too light to stay in place while you undock your phone, and have a bevy of adapters that are needed to fit your device. Docking an iPhone is typically a matter of shoving it in and fidgeting with it until the connector slides in as well.

The Elevation Dock is made of CNC’d aluminum instead of plastic and blasted to a ‘unibody MacBook’ finish. It also has enough weight to it to stay put when you’re placing your device in and taking it out.

I love the one simple support pad too, this allows you to place any iPhone or iPad without having to fuss with those pain in the butt adapters too.

The Elevation Dock looks pretty slick and comes in a regular or Dock+ configuration, with the latter adding a shielded Line Level audio output. You can get in on the party early by pledging $59 on Kickstarter while the funding is still open. After that they will retail for $90. It looks like a go at this point, considering that the project has hit nearly $500k in funding, well over the $75k goal.

Not a bad price for what looks to be a solid, carefully considered iPhone dock. I’m in for one. You can check out the Kickstarter project here.

Keep up with the latest Apple news every day on TNW Apple.

Read next: This Steve Jobs action figure is so realistic, it's actually kind of freaky