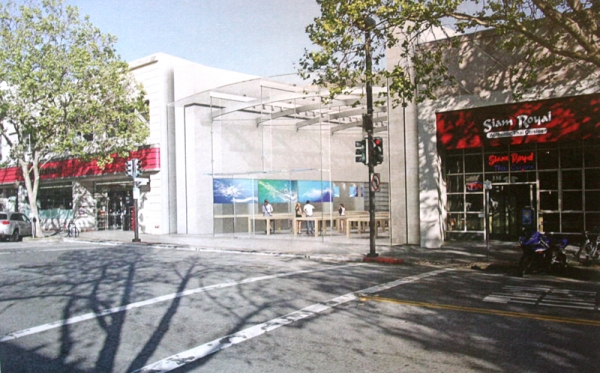 Apple has had plans to develop a new flagship, ‘prototype’ store in Palo Alto for nearly two years but today it appears that the company is finally about to push forward with development of its new retail presence in the California city.

Mercury News reports that Apple will build its second Apple Store in Palo Alto just metres down the road from one of its existing stores at 340 University Avenue, with work set to begin “any day now”, according to city planning officials.

On December 12, Apple was granted building permission for the two-story building, allowing the company to move forward with construction of the $3.15 million project, which is described as a “new prototype” and a “commons for community to gather”. The new building will feature clear glass panels, indoor trees, and will be framed by stone-paneled vertical columns under a glass entry canopy, with 10-foot tall entry doors.

The roof will be slightly curved, helping to deliver an “inviting day-lit interior that is designed to dissolve the boundary between exterior and interior to connect the activity on the street and within the store,” according to Apple’s architect Bohlin Cywinski Jackson (BCJ).

The newspaper also reports that “construction crews recently completed a pedestrian bypass tunnel in front of the site”.

Once construction is completed on the new Palo Alto store, Apple will close its older Store at 451 University Avenue and relocate to its new flagship store.

Apple has remained secretive on its plans, issuing the following statement:

“Our Palo Alto store was one of our first retail stores when we opened it nearly a decade ago and it’s been incredibly popular.

We are planning a beautiful new store just a few steps away, building on everything we’ve learned from our customers in Palo Alto and around the world.”