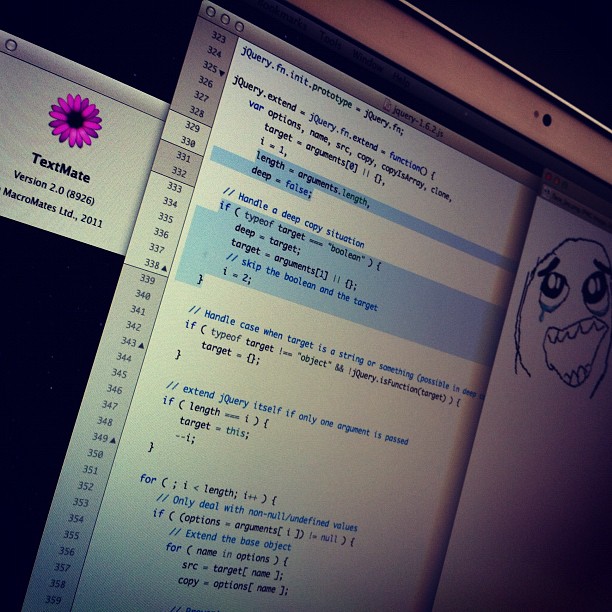 A screenshot of the alpha release of the unicorn app that is TextMate 2 is the most Tweeted photo on Instagram today, according to co-founder Mike Krieger.

The photo was posted by developer Aaron Draczynski to his Instagram profile.

We’re assuming that Krieger meant ‘most tweeted today’ and not ‘all time’, although the anticipation for this update to the widely used and fervently praised text editor TextMate is hot. It was first released in 2004 and rose to prominence as a viable alternative to BBedit.

Fans of the app have been champing at the bit to get their hands on the app and after an alpha version of the app was distributed to license holders of the first version, it was posted to Hacker News and wildly upvoted, causing a surge of interest. The alpha version was downloaded by many and Twitter is still abuzz with the availability of even an early ‘tester’ version of the app.

There is no timeline for the release of the complete version, although this alpha version had been teased several weeks ago by Macromates’ Michael Sheets. We’ve been playing with the alpha today and are enjoying it so far, we’re reserving any judgements or comments until the full version is released though.

Your best bet is to stay tuned to Macromates‘ site, although you can be sure that we will let you know the moment that it is released.