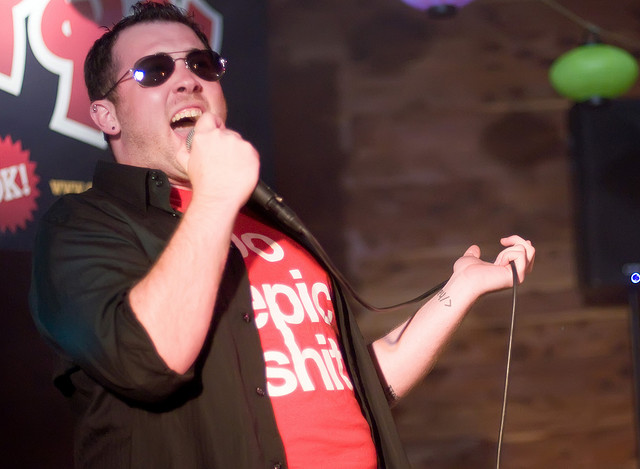 We’re already hearing about great geeky Holiday gifts for this Holiday season at The Next Web, but one that came our way might win over all of them.

The Soulo Karaoke microphone and app for iPad is probably the coolest external gadget to come along for iOS since the Square payment dongle.

If you’re a fan of Karaoke and like belting out songs in your worst (or best, but still worst) voice, then you know that if someone puts a microphone, music, and some lyrics in front of you, you’ll sing. Soulo does all that and more. You basically get your own mobile Karaoke station for a killer price.

Once you’ve sung your song, you can upload it to YouTube and share it on Twitter and Facebook. The only downside is that you can only share one minute clips of your performance. It’s because of licensing issues with the music, but it’s a bit of a bummer. The app should let you export the full version to MOV though.

The Soulo app for iPad and iPad2 is free, and the Soulo microphone is available at Apple, Wal-Mart, and Target stores respectively for $69. If you’re a pro, you can get a wireless version for $99.

I’ve honestly not had this much fun with my iPad since I bought it.

The Soulo microphone kit comes with the microphone, a speaker, and a code to get ten free songs.

The microphone is really sturdy and plugs directly into your iPad 1 or 2. It has a plug on it to hook up the included mini speaker, which is powered by your computer’s USB port. The cord isn’t that long on the speaker, which makes it a bit of a pain to find a good spot for it on the table. Once you do though, you’re set to sing.

After you download the Soulo app for iPad, which is free, it recognizes your microphone and you’re set to download music from the Soulo store. Inside of the box, you get a code for ten free songs which range from Three Doors Down’s “Kryptonite” to Men Without Hat’s “Safety Dance”. Other popular songs are available for $.99. It’s not a bad price considering you get all of the lyrics and everything is contained within the app itself.

The app is beautiful and extremely easy to navigate. This could be a perfect gift for any Karaoke friend, or your mom who really loves her iPad. Since setup is easy, I started singing a song within a minute of opening the Soulo box.

Here’s a demo of the Soulo rig provided by the company:

The Soulo app also lets you choose from any song you’ve purchased on iTunes, but you have to manually get the lyrics to the songs, as the ones you’ve purchased doesn’t have any attached to display in the Soulo app. Again, not the best situation, but understandable.

Lyrics are definitely available for the songs that Soulo provides for purchase and download. Pick your song to sing and make sure everything’s plugged in. Once the app starts playing the song, you’ll see the familiar Karaoke interface from bars all over the world, which slide over the words to prompt you to sing them.

Unlike the Karaoke you’re used to, there’s a number in the top right that shows you how in tune your voice is with the music. The more in tune you are, the more animated sparks will fly around the number. It’s kind of like Karaoke and Rock Band or Guitar Hero wrapped up into one.

If you’re not a fan of your voice, you can turn the auto-tune all the way up, to guarantee that you’re going to sound your best. However, I found that auto-tune makes every one of my songs sound like cover by T-Pain. The app also lets you tweak the microphone’s input level, and turn up the original singers voices if you want to just sing some back up.

I found that the little speaker that Soulo included puts out some great sound, much better than that of the built-in iPad speakers, which won’t be available once you’ve put the microphone into the jack. If you have an iPad 2, the app will even record video along with your singing. Unfortunately, I only have an iPad 1 and couldn’t test that part out.

After you’ve recorded your song, you can tap edit on the performance and choose which sixty seconds you’d like to share. Again, this is because of licensing issues, but perhaps we’ll get access to the full performance in a future update.

After all is said and done, without video, your performance will look and sound something like this. Let’s just hope that you have a better voice than I do.

Like I mentioned, the Soulo kit was super simple to set up, and was a lot of fun. It’s perfect if you have a bunch of friends over and you want to pass the microphone around for some Karaoke right in your house. I still love Karaoke bars, but being able to fire off a verse or two of “Rappers Delight” in the privacy of my own home is definitely worth something.

If you have a friend or family member who loves music or likes to perform at Karaoke bars, this is gift that you simply must pick up for the Holidays, or any occasion for that matter.

UPDATE: Win a Soulo from The Next Web!

Read next: iOS 5.0.2 Could Arrive Next Week to Fix Battery, iOS 5.1 May Add Siri Functions