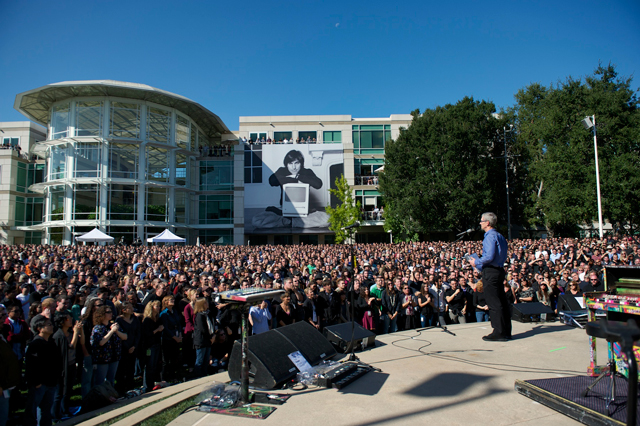 Apple today paid tribute to its founder and visionary CEO Steve Jobs with a memorial celebration in the amphitheater at its headquarters, 1 Infinite Loop, Cupertino, CA.

Employees gathered by the thousands in the open-air amphitheater on campus to view a program that paid homage to Jobs. Board member Al Gore was present and singer Norah Jones, a friend of Jobs’, performed as did soft rock group Coldplay.

Apple Stores were closed for three hours today to allow employees to view a stream of the proceedings and their windows were covered with white sheets for privacy. They have now re-opened.

This aerial video of the crowds at Apple HQ was captured by Cnet in which you can see the large banners with photos of Jobs hanging from the buildings:

The City of Cupertino also paid tribute to Jobs with a short video and a post on its official blog:

The memorial apparently ended with the playing of “You’ve got a friend in me,” the Randy Newman song that was the theme of Toy Story. Toy Story being the film that made Pixar, Jobs’ third major company, a success.

It appears as if the memorial was a success and employees appreciated the effort. As Thomas Han, an employee at Apple HQ put it, “that was a very moving Steve Jobs memorial for us…so proud, humbled and honored to be part of this legacy.”

Keep up with all the latest Apple news every day at TNW Apple.

Read next: Can UberMedia's Chime.in get you to Chime rather than Tweet?