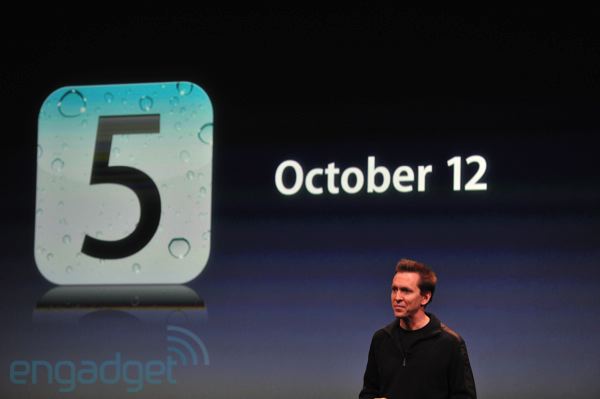 The long-awaited iOS 5 update for Apple’s iPhone, iPad and iPod touch devices will be released on October 12th. It will be available for the iPhone 3GS, iPhone 4, iPad, iPad 2 and iPod touch 3G and 4G. The update will be free.

Apple’s iCloud services, including iTunes Match, Find My iPhone, iWork in the cloud and more will also be launched on October 12th.

This is the date that we predicted last month as it coincided with Twitter integration events.

Eddy Cue, head of Apple’s online services, also announced a new Find My Friends app that will work on iOS devices and integrates with iCloud. It will allow you to locate any of your friends that have opted to share their location with you. The app is free for iOS 5 and Lion users.

Apple currently has 500K apps in the app store, including 140,000 iPad apps and holds 61% of Mobile browser usage via iOS devices. Users have downloaded 18 billion apps from the App Store, at 1B per month and Apple has paid out $3B to developers.

Apple’s Scott Forstall said that it has “seeded more than 100k developers, and they love it. We can’t wait to get it in everyone else’s hands.”

iOS 5 features many improvements including Notifications and an improved camera app as well as the Newsstand. The improved camera app includes features like cropping, rotating, removing redeye and access to the camera from the lock screen. 67 million users have signed up for Game Center.

One of the major new features of iOS is its ‘PC free’ design that allows you to sync, back up and set up your devices without ever having to plug it into a machine.

The announcement was made at Apple’s “Let’s Talk iPhone” event held at One Infinite Loop in Cupertino.

iOS 5 is the next major revision to Apple’s software for iPhone, iPod, Apple TV and iPad devices. You can see our complete rundown of the iOS announcements back at WWDC here. We’ve also got a closer look at some of the features of iOS like iMessages, Twitter, Setup and Notification Center, iCloud and alerts.

Read next: Apple launches Find My Friends app for 'Family and Friends'