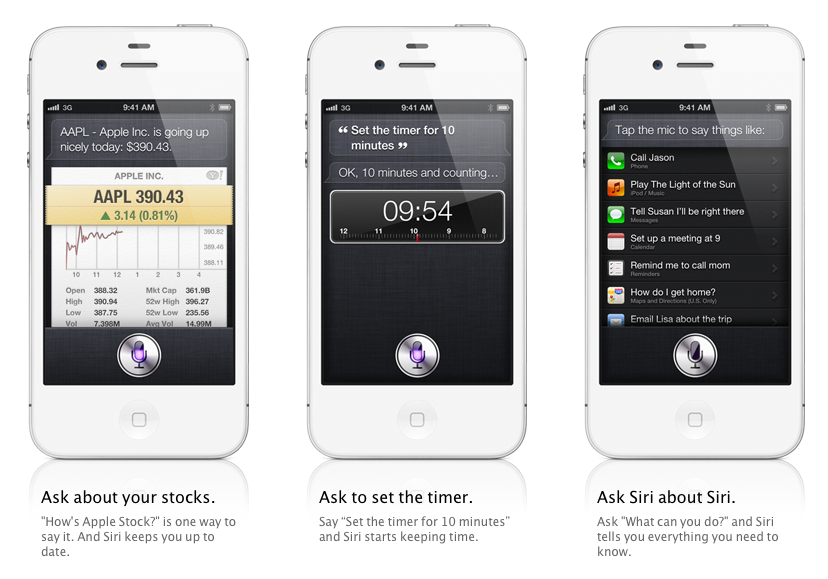 Apple has today announced its long-rumored Siri assistant feature for iOS 5, a voice-activated tool that will allow you to control many aspects of your iPhone and can perform tasks automatically.

For decades technologists have teased us with this dream that we can talk to our technology,” said Apple’s Phil Schiller, “But it’s never come true! It’s such a let-down! What we really want to do is just talk to our device!”

Apple specifically calls it “Siri: the intelligent assistant to get things done just by asking.” This technology was built out of Siri, an assistant app that Apple purchased last year.

The feature is activated using a long-press on the home button and a command spoken to the iPhone.

Many different commands were demonstrated including getting the weather, directions on maps, recommendations for restaurants and more.

Scott Forstall said that “I’ve been in the AI field a long time. This blows me away.”

Siri: “I am a humble personal assistant.”

The announcement was made at Apple’s “Let’s Talk iPhone” event held at One Infinite Loop in Cupertino.

The iOS 5 update will arrive on October 12th as a free upgrade to users alongside the iCloud products like iTunes Match and iWork.

iOS 5 is the next major revision to Apple’s software for iPhone, iPod, Apple TV and iPad devices. You can see our complete rundown of the iOS announcements back at WWDC here. We’ve also got a closer look at some of the features of iOS like iMessages, Twitter, Setup and Notification Center, iCloud and alerts.

Read next: Apple drops price of iPhone 4 to $99, iPhone 3GS is free with contract