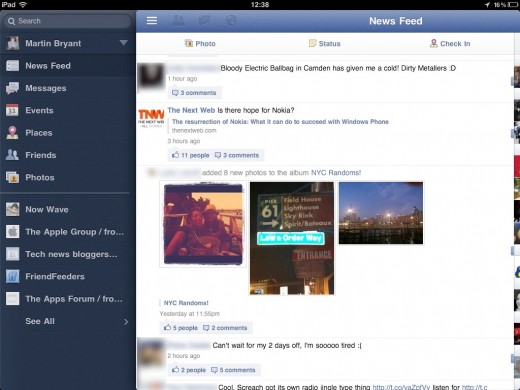 In a blog post on his site today, Jeff Verkoeyen gave the reasons that he is leaving Facebook for Google, laying much of the blame at the foot of the Facebook app for iPad. He was the lead engineer on the project and says that it has been ‘feature complete’ since May, when he stopped working on it.

After months of delays in the release of the app, during which he was working 80 hour weeks to complete it for an ‘imminent’ release, Verkoeyen finally got fed up with Facebook’s refusal to release it and is moving on to work at backend at Google.

Interestingly, within minutes of us reading the post, it had been updated to remove any references to the iPad app, although the full text is still available in the RSS feed. At this point we were contacted by Verkoeyen to clarify some of the facts of the situation.

First, Verkoeyen wants to stress that his time at Facebook was a pleasant one and that he enjoyed working there very much. This was reflected in the posting on his blog and still is. The frustrations surrounding the delayed release of the iPad app may have been a factor in his leaving the company, but they weren’t the only reasons that he had to move on.

Second, he says that while the app was ‘feature complete’ it was definitely not ready for public consumption. He says that there were definitely bugs and issues with the app that still needed working out. Although his post indicated that the development of the app slowed after his initial push in May, he says that it is still a ‘continually evolving’ app. Verkoeyen wanted to stress the fact that ‘feature complete’ and ‘complete’ are two very different concepts.

The app’s leak earlier this year led many of us to believe that we would be seeing its release soon, but it never materialized. This has led to much discussion about the cause of the delay, with a lot of the talk blaming bugs or a perceived competition with Apple, who some say is ‘scared’ of Facebook.

Much of this talk has been based on the fact that Facebook is said to be working on an HTML platform that will allow it to run its apps and games inside the browser of the iPhone and iPad without having to run natively.

Then there is the flipside of the coin where people are discussing the Apple event coming October 4th as the place where it will be unveiled.

Many of us at TNW have used the official Facebook iPad app since it was leaked and it is indeed a pretty complete package. It’s unclear what would need to be tweaked but it is always possible that Facebook is planning on integrating its new Timeline into the app before releasing it. Verkoeyen does say that the delays were for ‘various’ reasons.

I — for one — would welcome a Facebook iPad app with the new Timeline features built in.