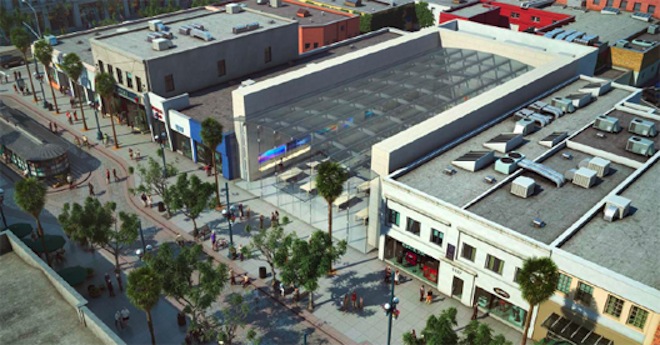 Curbed LA brings word about the proposed design for a new retail store on the Third Street Promenade in Santa Monica that looks like nothing you’ve even seen before the granddaddy of all Apple Stores.

The impressive rendering features an entire roof and the front of the 8,084 square foot building made out of sheer glass and will be replacing a three-story Borders that currently occupies the position. The proposal has been filed for consideration in front of the Santa Monica Planning Commission by ASB/Blatteis Promenade Holdings, LLC, which purchased the property in September 2010. One look at the renderings, however, and it’s clear that we are looking at an Apple Store.

The proposal also states that the company will be setting up a program to encourage use of alternative means of transport among its employees to get to the store. It will offer all retail employees at the store a monthly transit subsidy to the tune of $100 and a $20 monthly bicycle reimbursement subsidy. If passed by the planning commission, this will be Apple’s second store on the Third Promenade. The more the merrier, we suppose.

Read next: GammaRebels, a 'YCombinator for central Europe', gets under way