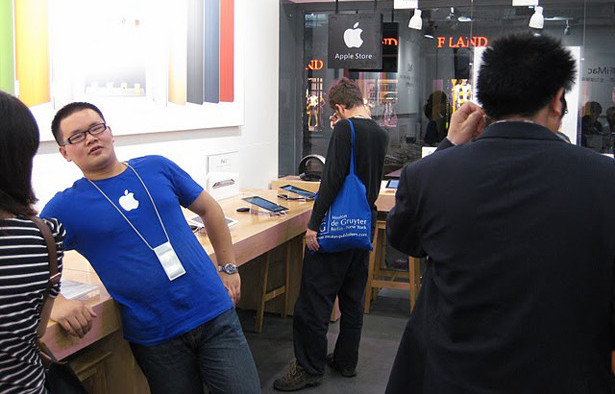 Officials at Beijing’s Quality and Technical Supervision Bureau have begun ordering unauthorised sellers of Apple products in Zhongguancun – China’s technology hub – to cover up or stop using the official Apple logo as it attempts to restrict sellers from distributing devices in the city.

Sellers will be banned from using the Apple logo or any brand name associated with Apple, including “Apple Authorized Reseller” or “Apple Direct Retailer” as a result of inspections by the bureau over the past week.

China Daily reports that as of Sunday, some Apple device sellers had been sluggish in their response to the banning order, with some covering Apple logos with blank sheets of paper or obscuring parts of the Apple logo and store employees still wearing Apple branded attire.

The campaign, which will reportedly last a month, comes after the discovery of fake Apple stores in Kunming, capital of Yunnan province, and Southwest China’s Chongqing, which attracted worldwide media attention.

Most the stores exposed by media remain in business, as Apple China has so far not responded to the issue of possible copyright infringements.

Officials say the large number of unauthorized Apple resellers affects the business of authorized ones, of which there are five in Zhongguancun.

Many stores offer legitimate Apple products but some have counterfeited iPhones and iPads, tainting the reputation of stores in the area. It is thought that despite frequent checks, stores will return to their normal authorised operations as soon as the inspectors leave the area, making it difficult for consumers to tell the difference.

Read next: Yokto lets you embed videos from multiple sources into one player