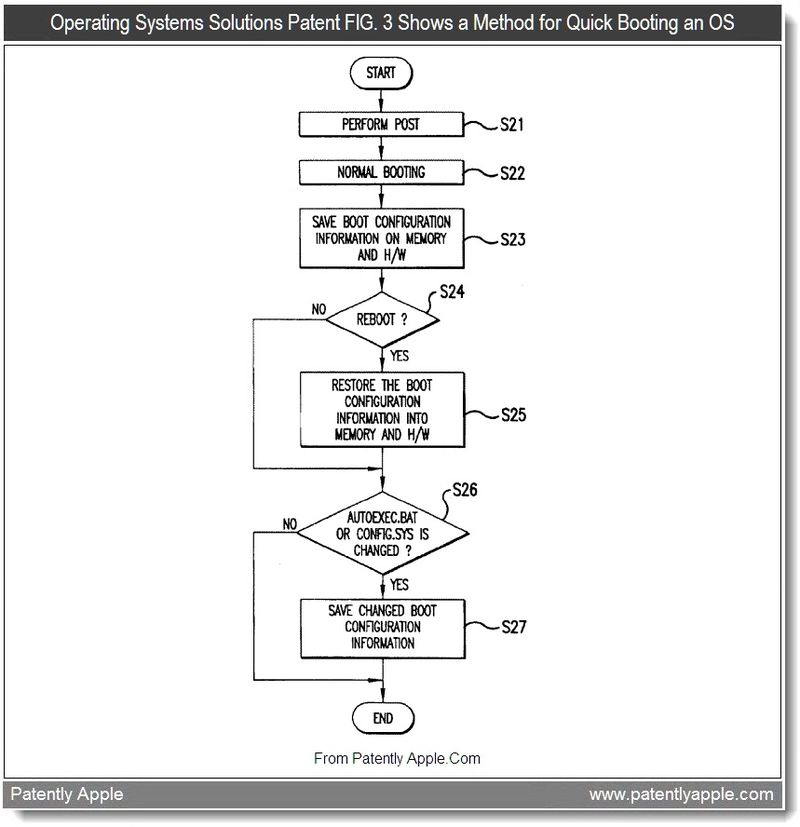 Apple has been sued by a seemingly nebulous Florida firm called Operating System Solutions Inc. over patents related to the fast boot technology in OS X, reports Patently Apple. The patent was previously owned by LG Electronics, the makers of the LG G-Slate, an Android powered tablet. This has led some to speculate that LG’s ties to Android could in fact make this a shell game that is being used to open a line of attack for Android on Apple’s OS.

The patent describes a method for booting a personal computer including the standard Power On Self Test, or POST that most machines perform, including Apple’s Macs running OS X.

A method for fast booting a computer system, comprising the steps of: A. performing a power on self test (POST) of basic input output system (BIOS) when the system is powered on or reset is requested; B. checking whether a boot configuration information including a system booting state which was created while executing a previous normal booting process exists or not; C. storing the boot configuration information from execution of the POST operation before loading a graphic interface (GUI) program, based on the checking result; and D. loading the graphic user interface (GUI) program.

The patent is currently owned by Operating Systems Solutions, LCC,  a company which returns very few search results beyond this pending suit. This fact seems to indicate that OSS may in fact be a shell company used by another patent holder to pursue a claim without directly involving a parent company. It is impossible to draw any direct correlations between OSS and LG as of yet, but the possibility exists that this is an attempt to gain leverage against Apple, which is currently pursuing claims against Android device makers HTC and Samsung over patent claims.

Some of those claims raised by Apple have to do with core Android features, not just the design of these devices, making the outcome of those suits potentially very impactful on any device running Android. If this patent was proven to be infringed upon by Apple, it would give the holder, whether that is OSS or a possible parent company, a significant bargaining chit to use to defend itself from infringement claims by Apple.

We’ll definitely be keeping an eye on this suit as it could very well turn into a major part of the battlefield between Apple and Android.

Read next: Twitter's Bagcheck acquisition could be a boon to brands