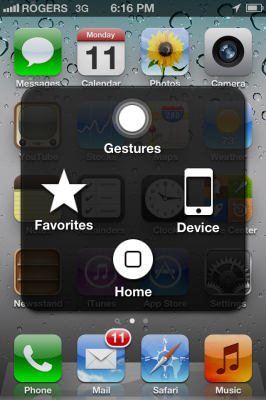 Apple has today released the latest version of the iOS 5 beta, bringing along a host of bug fixes and some new features. One of those new features, as detailed by Chris Oldroyd over at TiPB, is a new gesture system that is part of iOS 5’s Accessibility features.

The gesture system is a control panel, enabled inside AssistiveTouch that allows you to assign gestures to the functions of all of the existing hardware buttons, thereby removing any need, aside from emergencies, for the home, power or volume buttons on the iPhone and iPad.

The feature places a tappable zone in the bottom corner of the screen that opens the control panel. The resulting panel allows you to trigger the home button, pick from multi-finger gestures or create your own to perform actions. As you create gestures, you can find them under the Favorites section allowing you to see them on-screen as an overlay.

The Device menu lets you perform some operations that you’d normally use buttons for like locking the screen and increasing or decreasing volume. These controls are already available in the multitasking drawer, but this would be a great way to get at them if the iPad was being used in a display environment or in a rack that covered the home button. Think public displays in museums or mounted in a cockpit.

There are also a couple of controls like screen rotation and shake that emulate motion triggers of the accelerometers inside the device. You can see them in action via this video created by 9to5Mac:

When multitouch gestures that enabled app switching, closing and access to the multitasking drawer appeared in iOS 4.3.3, people were quick to jump on it as evidence that Apple might be doing away with the home button. It would be tempting to see something like this as another telltale sign. But the fact that it’s located in the Accessibility menu should tell you how Apple thinks about these features.

They should be looked at as one more way that Apple excels at offering incredibly good accessibility features to the impaired user, an area in which it is tremendously better than almost any other mobile device on the market. This feature could also be used in special use cases where the hardware buttons would be made inaccessible due to obstruction or perhaps security concerns.

Read next: Thought NASA was stuffy? Check out its geek-cool brand guidelines.