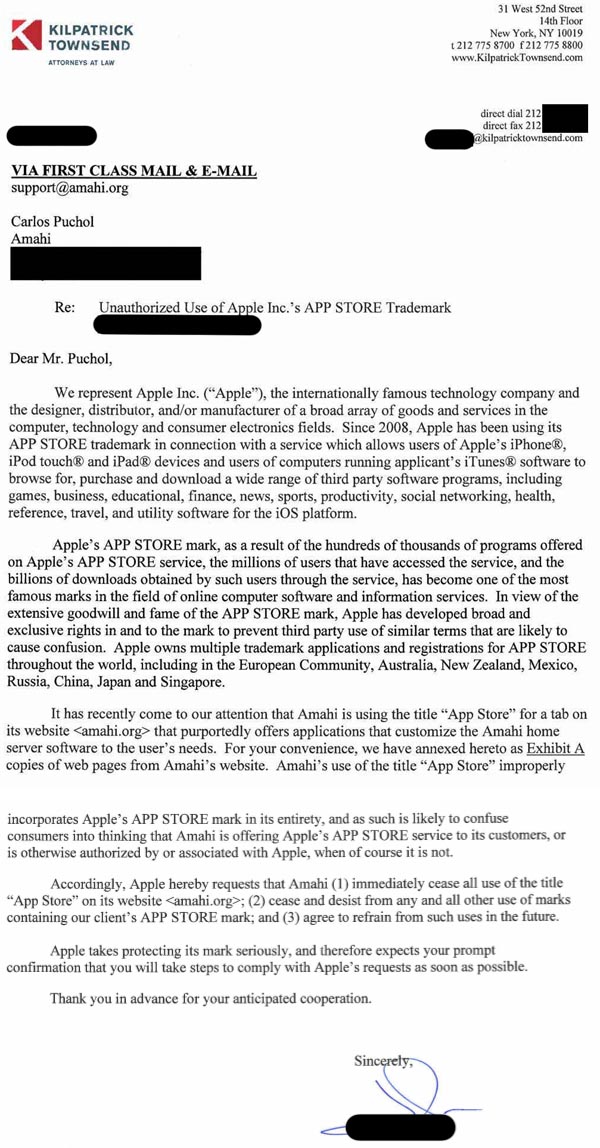 Apple has hit a small open source startup Amahi with a cease and desist notice over the App Store trademark suit. The notice was posted on Amahi’s blog in an attempt to help publicise the suit. We noticed it after it was tweeted out by Florian Mueller of FOSS Patents.

The company says that it was served with the notice due to the use of the term ‘App Store’ on its site. Amahi says that the action is most likely being taken by Apple in an effort to show that it is defending its claim to the term. Apple must show that it is taking action to defend the term in order to bolster its claims against Amazon and to defend an opposing motion by Microsoft.

Amahi isn’t the first company aside from Amazon to be hit with a notice by Apple either. Earlier this month the Wireless Industry Partners was targeted by Apple in an effort to get the organization to stop using the term in relation to its catalog of online marketplaces to purchase mobile applications.

Apple has met with some resistance from Microsoft on the matter as the Redmond giant fought back against Apple’s claims, stating that it believes the term ‘App Store’ to be a generic one. Apple fired a salvo right back in May, claiming that Microsoft was ‘missing the forest for the trees‘.

Small companies like Amahi seem to be taking on the role of legal canon fodder in this battle of monolithic technological schooners. For its part, Amahi is still trying to figure out the best way to navigate these newly deep legal waters.

“We’re still trying to determine what is the best course of action, however, this looks like a rather heavy handed move,” states the blog post. “Amahi being literally nothing next to Apple (sigh) we do not have the resources to fight this battle. Instead, we’re holding a Name the Store Contest”.

You can read the post about Amahi’s legal troubles here. It is asking for help from anyone who knows of current or prior use of the term “app store”, particularly before June 2008. This could help support the claims that Apple has no proprietary claims on the term.

What do you think about the term App Store? Is it truly a generic term as Microsoft claims? Or is there more meat here that belongs to Apple alone?