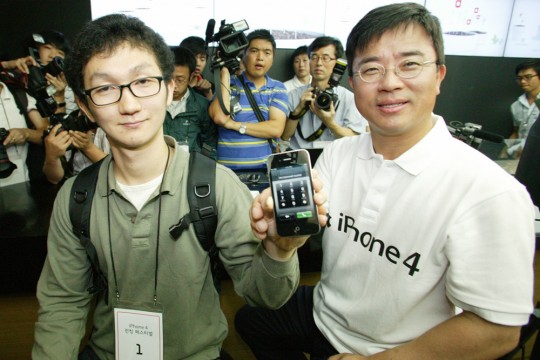 South Korean mobile operator KT Corp. has announced that the number of Apple iPhone users in the country has surpassed 2 million, just a year after the smartphone went on sale.

Sales figures account for a small percentage of the 16.24 million iPhones Apple sold in its last quarter but accounts for around a third of the smartphone market in the country.

By contrast – in December 2010, Samsung announced that 2.3 million Galaxy S units had been sold since its launch five months previous. In November, Samsung sold a total of 1.89 million handsets, slightly less than its October sales. The Galaxy S helped drive strong October sales with over 820,000 smartphones sold in South Korea during the period, amounting to a 43.2 share of the smartphone market in the country at that time.

The iPhone 4 has proved itself to be twice as popular as the iPhone 3GS, with about 8,000 iPhone 4 activations being performed daily, an average of 250,000 a month. Young Korean men are the target demographic, 60% of the 2 million users are male, with 77% of them between the ages of 20 and 39.

The iPhone has sold fantastically well in South Korea considering Samsung is a Korean company itself. With reports that the country’s smartphone market is estimated to have reaches 6.1 million units in 2010 and is forecast to increase to 16.2 million this year, both Apple and Samsung could find sales will continue to increase.

Read next: Vid.ly -- Upload once, get unlimited, universal playback for your video.