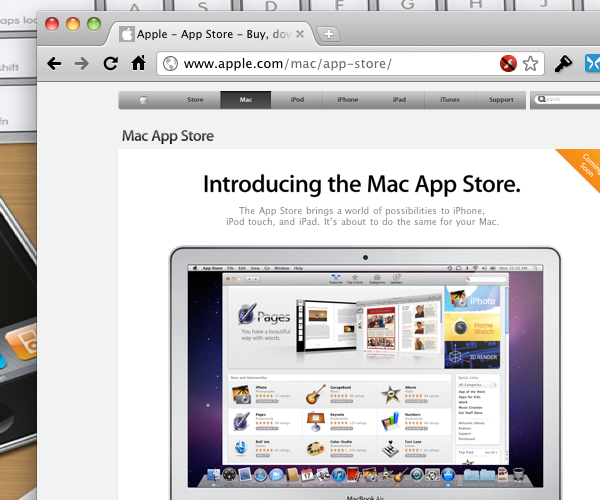 Contrary to recent rumors that the Mac App Store might open early (as early as next week some thought), Jim Darlymple of The Loop has reliable sources putting the launch still on target for January 2011:

Reports earlier this week claimed Apple would launch the Mac App Store on December 13, ahead of the holiday shopping season. However, according to my sources, Apple will launch the store in the new year.
While a specific date was not given for the official opening of the store by my sources, Apple will meet the 90-day deadline given during its October “Back to the Mac” media event.

Does this make sense to folks? MacRumors points out that a January launch would allow time for 10.6.6 to finish testing and be released, which I think is a logical reason. I’d also point out that we already know that the iOS App Store won’t be reviewing apps over the holidays (shutting down in a week or so), so it wouldn’t really make sense to launch the Mac App store just before people go on holidays.

We know that as soon as the App Store launches not only will there be a raft of new submissions, but also a raft of problems. People will want to “return” things and have issues…it’s just the nature of things. Best to leave it until the New Year.

In the mean time you can always just buy apps for people the “old fashioned way” over the Internet.