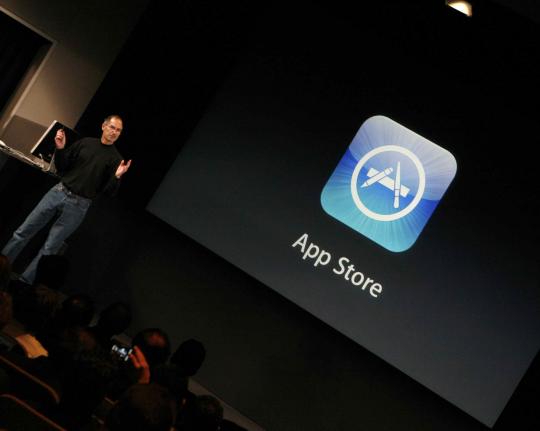 While Apple did address one of the developers in a press release, the larger problems appeared to continue as we again heard about compromised accounts, accounts being sold on China-based websites and more people losing more of their hard earned money. That story apparently continues, even today.

According to a tip that we received from TNW reader Alex Brie, the App Store is presently displaying over 25 nearly-identical applications in the top 200 list for top Paid Business Apps. The applications, produced by Group University and MinhIT softer, range in price from $.99 to $5.99 and appear to be quite generic reproductions of a single, identical application.

As further proof of something being quite fishy about the apps, the website links for each company point to domains that don’t actually exist. Group University, for instance, leads to a dead domain. The company published 30 applications in a single day, and now one of its apps (as of the time of this writing) has moved up to the 28th position.

What is unknown, at this time, is how the sales are happening. It’s likely that the apps are using in-app purchases to buy other apps from the same developer, thus leading to an explanation of how the apps are moving up the ranks so quickly. We’re unable to confirm exactly what’s happening, as of yet, but the scenario seems likely.

As seen in the screenshots above and below, the apps are piling up, one on top of another. Even Rovio, with its amazing success of the Angry Birds franchise, hasn’t managed to have two of its applications sit side-by-side in the App Store. The probability, as Brie puts it, is statistically impossible and yet these two companies have managed to move literally hundreds of spaces up the charts in a matter of hours.

Why Does It Matter?

The obvious answer to this question is that it matters because people are losing money. Obviously, in order for a paid app to be climbing the charts, purchases have to be made and it’s highly unlikely that they’re legitimately being sold. Beyond that, though, there are deeper problems.

Apple has had a history of heavy-handed control over the App Store. However, even with that control, it hasn’t managed to get a grasp on its own approval process. The rise of applications like this creates a number of problems.

First, it prevents legitimate applications from having the promotion that they deserve. That alone takes money out of the pockets from the developers. Second, it is obviously taking money from the pockets of those who are unwittingly purchasing the apps. Finally, it shows a huge flaw in Apple’s approval process. As you can note yourself, the links provided for support and the developer websites often times are links directly to Gmail. In our eyes, this is simply inexcusable.

We’ve been digging in deep with this, but so far haven’t found much information other than what is obvious in the store. If you happen to have been a victim of this latest scheme, please drop us a line and let us know what has happened.

At the moment, there are not even comments or ratings on these applications. This leads us to believe that we’re seeing the first hours or day of the scam. As we saw in comments in our earlier posts, people often don’t know what has happened until well after the fact. We saw comments of literally hundreds of dollars lost, and Apple needs to step up to correct the heart of the problem. For the time being, you should disable in-app purchases, change your iTunes account password and likely check the card associated with your account.

Read next: Social Media in 24 Hours