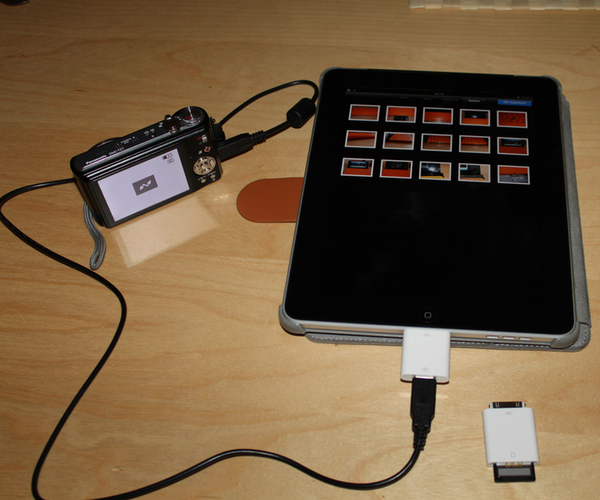 Just as we’re all enjoying multitasking, app folders, and a host of other goodies in iOS 4.2 on our iPads, it seems that Apple threw us a bit of a curveball. Turns out that in iOS 4.2 the dock connector port now only puts out 20 mA to the USB interface (compared to 100 mA before). Sounds good at first right? That means devices can’t draw as much power from your iPad (especially that connector is how it also gets power in the first place) when connected. Yeah, except that this also now the iPad Camera Connector kit‘s USB connector doesn’t work with many …

Yep, according to 9to5Mac the change seems to have kinda snuck in. So when you connect a camera to your iPad using the USB connector you might get this message:

Oh by the way, that’s my iPad and trying to connect my wee Samsung point-n-shoot to my iPad. Yep, it’s a problem alright. So, I also tested my Nikon D300 (a much DSLR), and since it uses CF cards, using the SD reader wouldn’t be an option for this camera (the point-n-shoot uses SD cards). It worked. Yep, I guess either the D300 doesn’t need more than 20 mA from the iPad or it supplies enough of its own power from the larger battery to do the work (I suspect the later myself, since you can’t charge the D300 via USB, but you can charge my point-n-shoot that way).

This problem doesn’t just mess with photogeeks like me, but also iPad owners who were using the USB port for other devices like headphones, mics, and keyboards too. As it happens I used my Logitech USB headset with my iPad this week with no issues. I didn’t, however, try the mic, but I suspect that if there was going to be a problem I would have seen the above error message.

Also tried my flexible USB keyboard and all I got was the usual “unsupported device” warning, and the keyboard worked as expected.

Does Apple know about this? If so, they don’t have anything official up but, the problem is on forum posts on Apple.com and other sites as well, so I’m betting they do.

Will another iOS update (4.3) fix this? It certainly could since everything was fine in 3.2.2. The rational seems fine, but the real-life outcome is kinda harsh for people who bought the camera connector kit to, well, connect their camera.

There are some work arounds that I’ve read:

Let us know in the comments what your experiences are and which cameras do, and don’t, work with the new 20 mA limit.

Read next: Would you buy a TV before it's been made? Kogan thinks you will