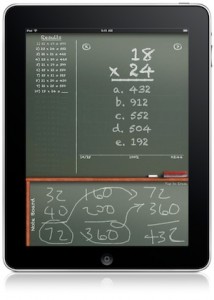 In October this year, not long before I joined The Next Web as Asia editor, I posted the following round-up of iOS apps for education on my own website, Edexpat.  The content is still relevant today, so here is the complete round-up with minor changes posted in full, with the author’s permission…

There’s no denying that the Apple iPad has caused quite a stir since it’s initial launch in April 2010. In this article I want to focus on some of the applications available for children of all abilities and ages. While I’ve arranged the featured apps by approximate age group, they are by no means limited to those age groupings. Sometimes apps targeted at younger kids are ideal for older kids with learning difficulties and, indeed, many are fun for adults as well.

For preschool kids, the iPad has a huge advantage, all of the apps here can be used over and over again, repeating the same tasks as many times as needed or as your child wants to. No need for the continual erasing of work or wasteful reprinting of pages required by the more traditional tools. Of course, with all apps for this age group, an adult should work with the child at all times to guide and assist with the learning process. It’s therefore a distinct advantage if the app is a least a little bit entertaining.

1: abc PocketPhonics : My 4 year old daughter loves this app. Even with the limited lite version that I used when preparing this article, she would repeat the exercises over and over.  Since upgrading to the full version, she still comes back, over and over, of her own accord to play with this.  A good educational app should not only teach kids, it should be fun and engaging as well. This app checks all the boxes. 2: Dot to Dot number whiz : As a kid, I used to love dot-to-dot pictures. There was the challenge of finding the next number in the sequence, the mystery of what the final picture would look like and the feeling of achievement on completion that I had actually created the picture myself. DotToDot number whiz takes this to the next level with fun pictures, filled in on completion, timed modes where kids have to finish in a certain time to open the next level and number sequences based on times tables so that older kids can still use the app to practice their arithmetic.  The simplest levels are extremely basic, even for the youngest kids, but, once the complexity is increased, it is an engaging program that keeps youngsters happy, and counting.

3: Alphabet Fun : Alphabet fun, is in some ways an extension of abc PocketPhonics. While it provides similar writing practice, it extends the learning scope to whole words, numbers and colours. Once again, in a very kid friendly and fun environment.

The kids have made it to Primary/Elementary school, they know their alphabet and they can count reasonably well and will be able to write a few key words. Now the work starts and they have to learn what to do with these words and numbers. The apps covered here allow parents or teachers to set up some quizzes and tests of varying degrees of difficulty that the children can then work on, in their own time or maybe against the clock. 4: Mathboard : Mathboard is pretty well known having been featured in the iPad is Delicious tv ad. The app does a very good job in it’s rendition of a traditional chalkboard which I’m sure will hold some nostalgic appeal to parents buying the app for their kids. I’m not entirely sure of the relevance of that user interface to modern education where electronic whiteboards are the norm. However, regardless of interface choices, the functionality of Mathboard. Covering kindergarten all the way through primary/elementary ages, the quizzes can be tuned to suit each level from simple addition and subtraction of small numbers for the younger kids, adding bigger numbers and multiplication and division as the kids grow older.

5: Spellboard : From the same stable as Mathboard comes Spellboard, attempting to do the same for word skills as the former does for arithmetic. Spellboard allows a teacher to set up spelling tests, complete with recorded pronunciation examples in any language and share them with students using iTunes file sharing. The students can then practice spelling and writing the words in preparation, for example, for their weekly test. As with Mathboard, the user interface is well thought out, using a cork board metaphor. Although

6: Create a Car : Create a Car is a little bit of fun to add to the more academic apps covered so far. Targeted from age 3+, kids can build unique cars from a selection of nearly 70 parts. They can then store these creations in their garage. A great application for developing creative skills and imagination.

And so we hit Secondary school age. It all becomes a bit more serious here. There are exams to pass after all. At this age, not only do the kids have to learn, they have to learn how to learn. Every child learns differently so it’s beneficial for kids to work with tools that fit their preferred style of learning. Any apps that the kids use have to compete against the many distractions on offer to this age group. Games, social networks, games on social networks.

7: GrammarUp : GrammarUp provides a multiple choice quiz system testing English grammar with nearly 2000 questions across 20 grammar categories. In the international school context where a high proportion of the pupils are not native English speakers, or, indeed, for any English language learner, whetever the age, this is a powerful tool. 8: Molecules : In any article like this, it’s all too easy to focus on the basics of learning: Literacy and Numeracy. Molecules is is a great visualisation tool for science students. 3d molecular models can downloaded from online sources and viewed on the iPad. The usual gestures can be used to rotate, and zoom in and out. While Molecules doesn’t do much more than this, it makes the teachers job of explaining, say, the double helix structure of DNA (included) much easier.

9: Idea Sketch : A hot issue for this age group is also planning. More and more schools are realising that they need to help kids with their organisational abilities. Essays need planned, assignments need planned, science experiments need planned. Idea Sketch is a useful tool to assist with this planning process. Students can start by drawing a mind map or a flow chart which can be converted to a structured list or saved to the Photos app and can even be uploaded to Facebook for collaborating on team projects.

Finding apps suitable for University students has been a real challenge. It’s not that they don’t exist. I thought about Headspace, but that’s basically another mind mapping tool. I though about Inkiness which ties in nicely with the final part of this article but, in the end, I’ve decided on an app that is built in to every iPad, iPod touch and iPhone…

10: The App Store. : You’ve made it this far, you know what you like and you know what tools work for you. Have a search through the app store, try a few lite versions and build a toolset that suits you, your learning style and your life and have fun in the process.

And finally, an honourable mention has to go to Evernote. I’ve been an occasional user of the free PC and Mac versions of Evernote for a long time but I’ve never managed to get into the habit of using it. It wasn’t until I downloaded the iPad version that I suddenly got it. Here was a cross platform tool where I could save all kinds of information in a searchable (even within images) format. As a proof of concept, all of the research for this article was pasted into Evernote notes. The article itself was written within a note. Yes, I could have saved webpages to file and written this in word or notepad, Evernote enabled me to have all of the information to hand in a single app, available no matter what machine I was working on. So, as an honourable mention we have…