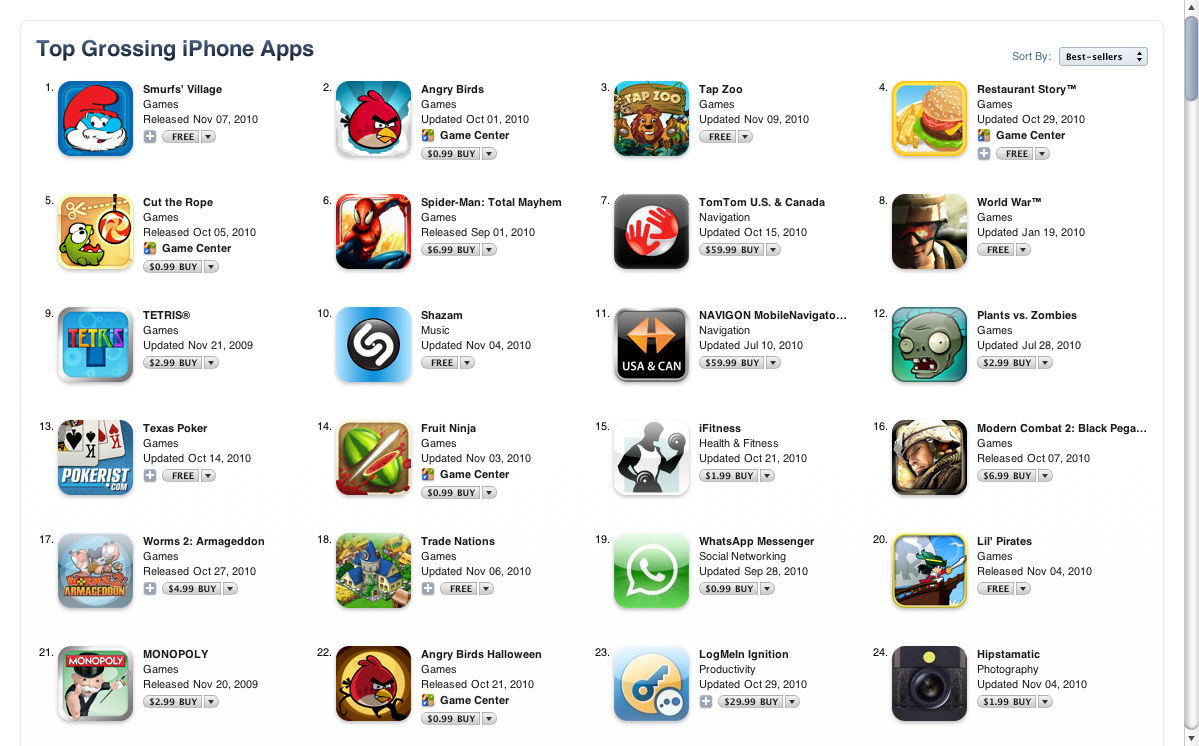 Before you say “Wait, how can a free app be top grossing…” it’s from the in-app ads and in-app purchases. Like in PocketFrogs, more and special frogs or the New York Marathon app real-time results or Wired or Marvel Comics or DC or Maxim…

Fine you get the idea, the point is that it’s pretty amazing. By my count (Canadian app store) 48 of the 200 top grossing apps are “free.” If you look at just the top 100 the percentage is even higher:

A look at the top-grossing iPhone apps today finds 34 of the top 100 apps are free, but make their money through in-app purchases of mostly virtual currencies as well as other premium features.  Remco van den Elzen, CEO of analytics firm Distimo, said he believes in-app purchases now represent about 30 percent of all iPhone App Store revenue. “We’re seeing more developers implement more in app-purchases especially with games,” he said. “Freemium Apps are also picking up significantly. A lot of developers realize it’s a successful model.”

via One Third of Top-Grossing iPhone Apps Are Free: Tech News «.

Let’s look at this another way. Because you can’t “risk free” try iPhone or iPad apps (you buy it and hate it, tough), sometimes paying even a little money for an unknown app is something people don’t want to do. And by people, I mean me. Now, if the app is free, there is no risk. I can try it and if I like it, awesome. Oh, sure I plunk down probably far too much money on apps, but I don’t buy every app I think is cool. Which is why I don’t mind ads in my apps and I think it’s an awesome idea to let you buy add-ons for your app, within the app itself. Want more Angry Birds levels? Want a new sound effect or photo filter effect? That will be $1 for a special pack…

This should make all app makers happy. By allowing people to upgrade on the fly, you can increase revenue and, I think, by extension build loyalty. I’d certainly continue to use a useful app that I could add onto as I needed.

So do you click on ads within apps? Do you make in-app purchases? What is your favorite free app that lets you buy more as you use it (I’m thinking about the comics and magazine apps)?