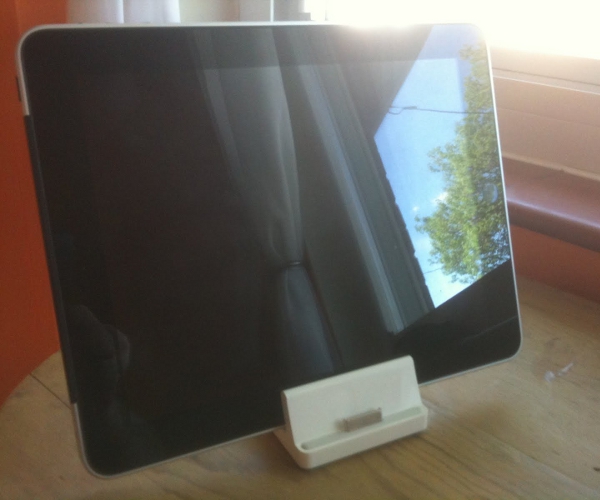 Patently Apple has found some rumored future iPad designs that surfaced in China last week that seem to clearly show that future iPads may have landscape docking. This is certainly a rumor at this point, but if true would certainly be exciting for iPad enthusiasts.

Landscape docking makes perfect sense – frankly, we didn’t buy the dock mainly because of the lack of a horizontal option (went with the Bluetooth keyboard instead). Also, horizontal docking would allow users to watch video correctly when docked, which would also be a huge plus.

UPDATE: As one of our readers below points out in a comment, the shots of the front of the iPad in these designs pretty clearly show a circle – which would if included almost undoubtedly be a FaceTime camera (that said, this part of the design shouldn’t really be news to anyone at this point – a second generation iPad without a FaceTime camera is pretty much unthinkable at this point to us, but still nice to know whoever drew up these designs knows that too!):

There is also possibly an addition mystery port (which could be a USB, HDMI or card reader slot – or something else) as seen below:

There is also an unidentified image in the bottom-left-hand-corner of the iPad in the new patent images. What could this be? Patently Apple seems to think that it could be a “smart bezel” that might perhaps function as a page turner for ebooks. Our first impressions? Well, maybe it is some kind of sensor (the wavy lines kind of suggest that) or maybe a fingerprint scanner for security (again, wavy lines). Heck, maybe it’s a speaker? All of these are simply wild guesses – frankly, it could be anything (and we’re not even sure if there would be room for a speaker).