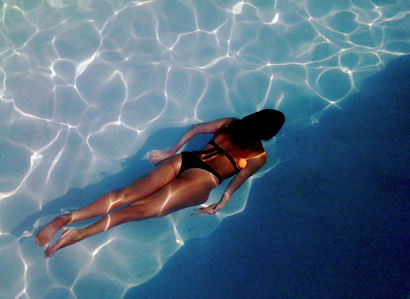 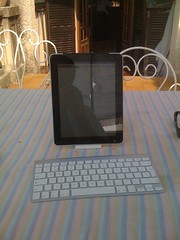 This weekend I returned from a two week vacation in France. I had a great time and spent a lot of time at the beach, near a pool and in the water. This is also the first trip in years that I decided not to bring my laptop. Even for my skiing trips I always ended up lugging my MacBook Pro along because I wanted to watch the movies we made during the day and of course I would then spend the evenings in some bar with free wifi doing some, very important, work.

This year was different. I am now the proud owner of an iPad.

On my last trip I brought both the MacBook Pro and the iPad but ended up mostly using the iPad. This trip I decided to go all in and rely solely on the iPad. I did upgrade to the 64GB + 3G version a few days before I left and upgraded to an International Roaming subscription with Vodafone. All set!

Well no. I learned some important lessons these past two weeks and I thought I might as well share them with you here.

Vodafone Hell
Although I had upgraded to the International ‘Deluxe’ version of the iPad subscription (with 200mb a month extra roaming space) and had checked the Friday before if everything worked the inevitable happened:

Vodafone had activated my account for The Netherlands but hadn’t received one particular piece of paper from me. So although the helpdesk assured me it would work, and it did in The Netherlands, it didn’t work abroad.

After almost 2 hours with the helpdesk (yes, international calling) I managed to find this out and then it took me a lot more time to locate that piece of paper and have it faxed by someone in the office. The next day, it finally worked.

And then it stopped working, again.

After another loooong call to the Vodafone helpdesk it turned out that I didn’t actually upgrade to a more expensive account but they just add an expensive layer on top of your cheap subscription. For that cheap subscription they are forced to warn you (European law) when your bandwith costs reaches a certain point. No matter that you have an international account so those bandwidth costs don’t apply to you, they HAVE to warn you. How do they do that? With a text message.

So yes, no matter what subscription you have, you will be unable to use the web internationally within 24 hours of arriving in another country. Only way to re-activate is by calling the helpdesk at your international calling rates and give them permission to charge you extra. Of course, they won’t charge you extra because you upgraded to something else. A person could go crazy thinking about this.

So, all in all I spend the first week mostly without an internet connection, waiting in line to talk to a Vodafone helpdesk person.

Now for the good news…
That was the bad part of the experience. The rest is a lot more positive. The iPad is a great gadget to carry with you while traveling. Especially once your Internet Connection starts working.

On Reading
I read Richard Dawkins ‘The Greatest Show on Earth’, “Packing for Mars” by Mary Roach and Michael Crichton’s “Pirate Latitudes” all in iBooks on the iPad. I read in the evening outside while mosquitos were sucking me dry, I read in bed, next to the pool, while on the loo and at the beach. Yes, at the beach.

I even read books while sitting in the sun, with my shades on. I know a lot of people complain and say you can’t read that well in the sun so I tried it out. Fact is, even if the sun shines directly at the iPad you can still read it. A book reflects too much sun when you hold it directly in the sunlight. The biggest problem with reading in the sun: it is just too damn hot. Mostly I read while sitting under a parasol.

But even IF you want to read a book in the sun eBooks on the iPad work just fine, and probably even better than paper (‘pBooks’?) books.

On Working
Although I enjoy sitting in the sun and doing nothing I also like to use the time to think about stuff and write some documents, or blogposts. This trip I had agreed to write a few longer blogposts and even that worked very well on the iPad. As you can see in the photo on top of this post I had brought a dock and a bluetooth keyboard to write those longer posts. The advantage of working on the iPad is that it doesn’t really do Application Switching well. Yes, I know most people consider that more a bug than a feature but it does help you focus on the task at hand better than usually. There is hardly any urge to press CMD + Tab and quickly switch to Mail or Tweetie. The keyboard handles well and connecting it is seamless.

One other detail: my sunglasses are polarized and so is the iPad screen. That means that if you wear the sunglasses and hold the iPad upright you won’t be able to read the screen. In landscape mode it does work. So either get unpolarized sunglasses or hold your iPad right. ;-)

On Entertainment
Before we left I loaded a bunch of movies onto the iPad, just in case. There are always moments where you have to wait while traveling and you are too lazy or tired to read a book or check your mail. For those instances I, uhm, acquired a bunch of movie classics that I either seen before and loved to see again or which were new. When you are in an airplane with lots of noise and distractions you don’t want a complicated movie with lots of dialog so I went for the action and adventure genre with classics as “The Hunt for Red October” but also the complete James Bond collection. I also brought Fight Club, Edge of Darkness and Team America with me. Use Permute to convert your existing movie files to the iPad format or buy your movies straight from iTunes.

To be honest, I did illegally download a bunch of movies. But, in my defense, these were all movies I already owned on DVD. The problem is that ripping a DVD you legally owned and then converting it just takes hours or days. And then often the audio or video is missing. Downloading it via BitTorrent usually takes less than 20 minutes.

On Travel
For travel itself the iPad works wonders too. We ended up not printing our boarding passes but just showing the full PDF on our iPads (My girlfriend has one too) and nobody objected. I used Tripit to track our trip data and Google Maps to look up stuff while we were driving around. I know you can also download city guides but we went somewhere where I used to live as a kid so I didn’t feel the need for those. If you travel to other cities than this is certainly a great way to find information.

Kids and the iPad
Both our daughters have their favorite games installed on our iPads. Some of those are fun enough for everybody. We played a lot of Angry Birds and Faye(5) enjoyed it as much as Loïs(8).

Conclusion
I’m completely sold on the idea of using the iPad as an alternative to carrying a laptop. It does everything I need it to do but is just so much more convenient to carry with you. It is light, thin and lasts 12 hours on a battery charge. You just can’t beat that.

Even on a sandy beach you can still take out the iPad and use it. Sure, you don’t want to drop it in the sand or get it wet, but that goes for books too.

The only thing that is missing in my set-up is the iPad camera connection kit. They were sold out when I left and I still don’t have one. If I had one of those I could have used it to get the photos and movies off my digital camera and look at them with the whole family in the evening. Now we were passing around the camera and watching the little screen on the back, and that just doesn’t go over that well.

If you are traveling somewhere soon I would seriously consider trying this too. The iPad is light, lasts a very long time on the battery and packs very powerful features. Whether it is work, entertainment or getting local information the iPad does it all.

Oh, if you insist using your iPad underwater check this out first: