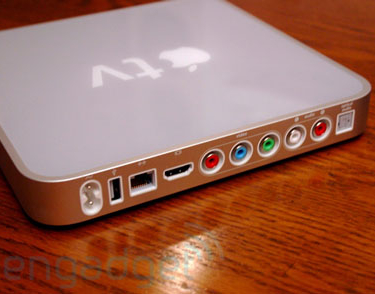 Engadget has published a story claiming that an unidentified “trusted source” has told them that Apple will rename Apple TV as iTV when/if it relaunches with a new device.

Also, Engadget is saying that this source has told them that the iTV will only play content up to 720p and will not play 1080i and 1080p content, possibly because of limitations with the A4 chip it will use (which is the same chip the iPhone 4 and iPad have). The device will reportedly come with 16GB of storage and streaming content will also be available. In addition, as many have also speculated, the device will have apps (Engadget didn’t say this straight out, but we’re assuming they mean iOS apps).

Right now, this is all firmly in the rumor category to us. But for a moment, let’s assume that this will come to pass sometime later this year and sell for $99.

First of all, the 720p limitation seems silly. Yes, a lot of streaming HD content right now streams at 720p, most notably Netflix, but to limit the device to only 720p and not full HD just doesn’t make a lot of sense. Secondly, as far as the name goes, as one of our UK writers has pointed out, ITV is actually a British broadcasting network (that’s been around since 1955), so we’re wondering if Apple would have to  license the name from them, or how that would work.

We’ll of course keep an eye on this story and have emailed Apple for comment.

(Note: The image is of an existing Apple TV, not the reported new model)

Read next: Firefox 4, Beta 3: Out Now, With Improved MultiTouch Support