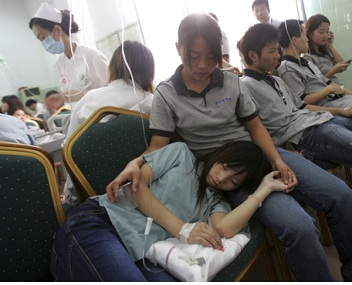 The Xinhua news agency is reporting that a worker at a Foxconn-owned subsidiary has died after falling off a dormitory building at the factory. There is not yet evidence as to the nature of this death, but if it is a suicide, it will make for the eleventh among Foxconn workers this year.

Despite the bad press coverage, Foxconn suicide rates are actually lower than what one would statistically expect, which are about 14 per 100,000 people per year in China. Foxconn employs an estimated 800,000 people, which means that one would expect closer to 33 suicides over the course of the year.

Foxconn became associated with workers ending their own lives when an employee committed suicide after losing an iPhone prototype. The issue many discuss when it comes to Foxconn’s problems are not the pay or the condition of the facilities. Rather, there are reports that the psychological conditions of working at one of the company’s factories are incredibly taxing. As one former employee writes:

It’s not so much that it’s physically demanding, but it is emotionally and somewhat psychologically demanding. The engineers and managers are in your face, and always always ALWAYS looking over your shoulder to see if you’re doing it right, and when you’re not they chew you out for it. I worked in the repair department, fixing bad units coming off the line. There are no chairs, and if I leaned against the table to rest (discretely) they would notice and get in my face.

Foxconn is the largest manufacturer of Apple products in the world. The company also produces units for Dell, HP, Nokia, and Sony Ericsson.

Read next: How's this for an USB stick?