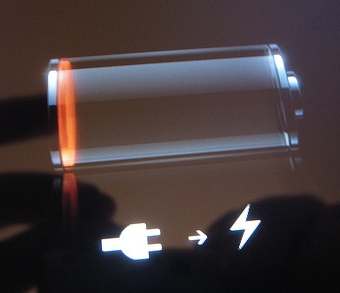 There’s a lot of chatter about the great battery-life associated with the iPad.

Certainly, once it’s fully charged, if you stick it in your bag and don’t use it, it pretty much stays right up there at 100%. as you’d expect. However, once it’s on and your surfing or using apps the battery begins its steady but inexorable decline.

That said, it’ll still keep you going for several hours… longer than most, if not all, netbooks and laptops,

So the iPad’s excellent battery life is not to be sniffed at… but be warned! Don’t take it’s ‘always-on-ness’ for granted!

If you have an iPhone, you’ll be pretty used to lousy battery life and, if you’re anything like me, you’ll also have become used to carrying your charger along with you so that you can plug it in for a boost during meetings. I even ensure that, when I can, I book advance train tickets with a seat reservation by the window so that I can ensure that I’m near a plug socket so I can boost my phone en route.

Of course, having the iPad has taken some of the pressure off my ailing iPhone 3G (roll on the arrival of a shiny new iPhone 4 in the next week or two), but on Friday I was planning to leave the car at home and travel to Manchester by train (this time on local rattlers without power sockets) using my iPad to catch up with some work and some reading.

As always I set my iPad on charge before heading off to bed on Thursday evening in readiness for the next day… after all it takes virtually all night to charge the beast… quick boosts it doesn’t do!

Come Friday morning, I reached for the iPad only to discover is sitting on 46% charged. I’d forgotten to flick the switch on the power socket!

Now don’t get me wrong, 46% would have easily lasted for the 90 minute journey, and may even have got me through the day, much of which was to be spent on meetings and also producing stuff on my netbook… but then, by the time I’d have got home it’d have been down to 10 or 15% and the evening is when the iPad gets the most hammer. As I step through the door it is normally plucked from my grasped by one family member or another, keen to quickly check something out on the net, update Facebook or play a game.

So! Instead of being green(ish) and travelling by train, I changed my plans and elected to drive to Manchester instead, so that I could use my in-car iPhone charger to boost my iPad…

All well and not very good… half way to Manchester I checked to see how the battery boost was going… still on 46% due an accessory not made to work with iPad, despite the fact that it happily charges my iPhone!! Oh Apple I love you, but your grasping control-freakery and greed is exasperating sometimes.

So there’s not really a moral to this tale, just a couple of things to bear in mind.

Firstly, the fact that the iPad does most things for you but not quite everything means that it’s an additional gadget rather than an all-out replacement for anything.

Second, whilst its battery-life is a huge improvement on the iPhone (and so it should be given the relative size difference) the time it takes to charge the device is correspondingly hefty.

Combining these two facts, means that, no surprise, the iPad is far from the greenest gadget out there. Just another thing to think about if you’re mulling over an iPad purchase over the next few days!

Read next: [Updated] Under proposed legislation, White House could be given an Internet "kill switch"