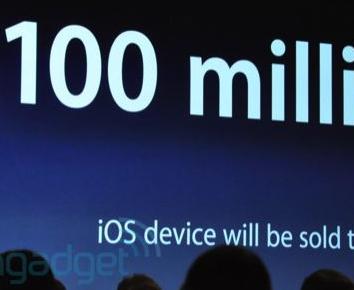 Today at the WWDC Apple announced that it is nearing the mark of having sold 100 million iOS devices. They expect to reach that number this month.

With the recent success of the iPad (2 million sold and counting), Apple has now released three major iOS devices, and they have all been smash successes. The iPod Touch, the iPhone, and the iPad have each worked to either redefine or create a new product niche, and have done so in large order.

While the iPad is eating into the sales of the iPod Touch (and netbooks, but that is a different story), the three legs of the Apple iOS stool are each strong. As Apple noted, “no one even comes close to this.” This scale of units sold and the depth of the Apple product line is breathtaking, creating a vast market for the sale of applications that is democratizing development around the world.

Perhaps we will see 125 million iOS devices sold for next year’s WWDC, who knows. Image via Engadget.

Read next: The real reason to get the new iPhone 4