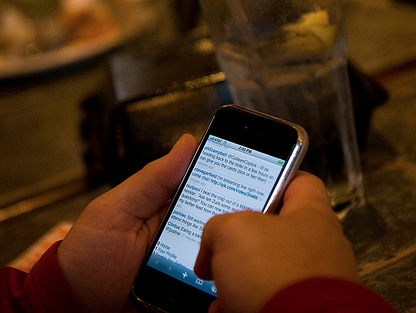 We’ve come across a variety of reports online, on twitter and via email claiming that twitter’s new iPhone app is draining battery life on users handsets.

The details are sketchy and may turn out to be false but we’ve seen too many complaints for this to be complete BS. The concerns generally point to issues after the launch of twitter for iPhone and something causing users battery to drain extremely fast. The one thing the majority of these users seem to have in common is that app. Similar issues arose almost a year ago with twitterific but have seemingly been resolved.

We’ve contacted the Twitter for iPhone lead developer, Loren Brichter, for comment and will update if/when we hear back. (Update: Brichter has responded at the foot of this post)

It is important to note that this might not be a twitter for iPhone issue at all but rather something a large group of users are all doing the same or potentially a bug in the iPhone OS on some level.

For now, do let us know in the comments if you’ve even experienced any radical changes in battery life recently and if you’re using twitter’s official iPhone app.

Brichter responded saying “Apps don’t run in the background and therefore can’t suck up juice. Are these users using jailbroken or hacked phones?”) I responded to say that it may be possible that users are simply opening the app frequently. Waiting to hear back.

Read next: The New York Times Fights Back against Foursquare and Yelp