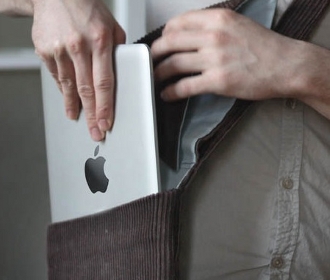 I spent the last 15 days on the road, speaking at one conference in Washington DC and then blogging last week at our tremendous annual The Next Web Conference in Amsterdam. I took 7 flights. I didn’t bring my laptop, just my iPad. Here’s what I learned.

Why I brought only the iPad

First of all, a little bit about my decision to only bring my iPad. The two most important factors were that the iPad has a killer battery (10+ hours no matter what I’m doing) and that it is slim and only 1.5 pounds. Compare this to my 6+ pound and well over one inch thick laptop that gets at best 5 hours of use (on a 9-cell battery) – basically I bought the iPad in part to be used as my travel laptop replacement for these reasons.

Now, just to be clear, I haven’t purchased any accessories for the iPad, including the keyboard. More on this decision below.

Oh, and one of the best reasons to bring only an iPad on a trip like this – airport security did not once – on 7 flights – ask me to take it out of my bag.

As happened throughout my trip (esp in Amsterdam where they are not for sale yet) people wanted to touch the iPad, talk to me about it, and were always surprised when I handed it to them to play with (you’d have thought I was handing them a Fabergé egg or a newborn by their reactions). I took notes at the DC conference on the iPad, which turned into three posts. However, and here is the main moral to this post – all these posts came at best hours after the sessions because I didn’t actually post any of these stories to WordPress using the iPad.

Why it isn’t a blogging machine right now

There are a few reason why (at present) trying to blog from the iPad isn’t a good idea. First of all, even though I’ve had my iPad for a number of weeks, I still haven’t rearched what I would consider an acceptable typing speed using the on-screen keyboard. One reason for this is that Apple’s autocorrect on the iPad is way too sensitive, much more so than the iPhone/iPod Touch. I’ve found that I have to constantly go back and retype gibberish that the iPad throws up on screen, and that is a major time waster.

Of course, perhaps if I had purchased a keyboard, a lot of my typing woes may have decreased, although I imagine that autocorrect would still be a pain. That said, I personally do not like the idea of a keyboard for the iPad – the whole point in my mind is that it is a self-contained device that shouldn’t require external equipment (though obviously Apple doesn’t agree). Also, add the extra weight and bulk of the keyboard, and you’re getting into netbook size territory. However, I’d be lying if I said that I’m not going to take a closer look at the pros and cons of getting a keyboard soon.

The other major reason that blogging on the iPad is hard is because of picture resizing and uploading. Nevermind that there isn’t a camera, there isn’t a file system to download pictures off the Internet that could be used to resize. Also, while there are a few image apps out there for the iPad, none that I’ve tried work all that well, and again, without a file system, getting pictures uploaded to  Wordpress is impossible (as far as I can tell).

So to make a long story short, I gave up and borrowed laptops (one per continent) to do all of my posts, including when I was covering our keynotes at TNW Conference. I could do this because I was around friends and colleagues that could furnish me with a spare laptop (thereby supporting my experiment). However, in the near future at least, I will haul my laptop on any trip I go on where I’ll be blogging. Zee is right – the thing just isn’t a work laptop replacement.

So much for blogging, let’s quickly go over the couple of other things the iPad does and doesn’t for a traveller. One major gripe a lot of people have expressed regarding the iPad as a travel device is a lack of a media reader for uploading and backing up pictures. Honestly, I didn’t find this too annoying – just make sure you bring enough memory cards and to store all your pictures and then upload when you get back (I brought about 16 gigs worth which coincidentally is the hard disk size of my iPad). Of course, something catastrophic could happen and you could lose all of your pictures, and I’ll admit that is a risk I was willing to take that others may not.

Also on the travel side, seven flights means a lot of wasting time, and the iPad is a great time wasting device. Games, travel guides, maps, movies, Netflix (I subscribe to Boingo for the WiFi needed on the ground, and flew Virgin America and Jet Blue that both had in-flight WiFi) ebooks (this is my first ebook reader, read a couple of 150 page books straight, eyes didn’t hurt at all), all worked flawlessly and proved to me that while not a blogging machine, for pure travel, the iPad is currently #1.

P.S. At least one hotel in London seems to agree that the iPad is a must for travel.

P.P.S. I wrote this post on my iPad on my last flight – then published it from my laptop after I got home.