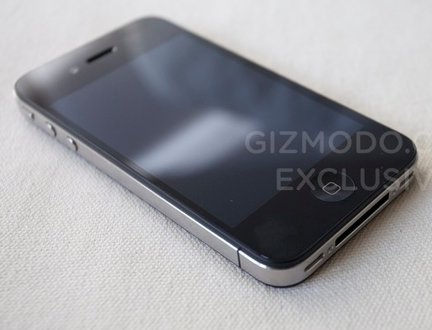 Gadget blog Gizmodo has managed to get its hands on what is now widely considered to be the new iPhone 4g. You can read the background to this story here.

The part we’re puzzled about is how Gizmodo managed to get hold of the device which has up until now been in the hands of rival gadget blog Engadget. We’re digging. Seems the “finder” of the phone has been shopping the device around and Gizmodo purchased the phone from them a week ago.

If you’re still unconvinced (and we wouldn’t blame you for being so), Apple blogging phenom John Gruber of Daring Fireball had this to say:

“So I called around, and I now believe this is an actual unit from Apple — a unit Apple is very interested in getting back.”

“It’s been an open secret to those of us in the racket that Gizmodo purchased this unit about a week ago, from those who claimed to find it. That this belongs to and was made by Apple is almost beyond question at this point. Just how much it looks like what Apple plans to ship this summer, I don’t know. Note that it’s thinner than a 3GS.”

To say this is uncharacteristic of Apple would be an understatement. So uncharacteristic, you’d be forgiven for thinking it was all part of Steve Jobs’ creative master plan.

Before the images and video, details of what’s new and changed.

Now it’s likely you’re just as surprised with the change in design direction as we are, Gizmodo have a different take:

“this design is not a departure. Not when you frame it with the rest of the Apple product line. It’s all the contrary: This new iPhone gets back to the simplicity of the iMac and the iPad. In fact, you can argue that the current iPhone 3GS—with its shiny chrome rim and excessively curved back—is out of place compared to the hard edges and Dieter-Ramish  utilitarianism of the iMac and the iPad. Next to the iPad, for example, the new iPhone makes sense. It has the same feeling, the same functional simplicity.”

I personally like the new industrial redesign although it’s highly possible that this isn’t even what the next iPhone will look like but merely a guise in case the device was found.