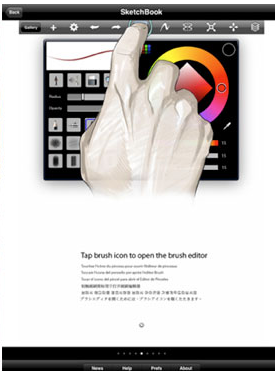 In case you doubted those iPad sales numbers, be skeptical no more. iPad application developers are already seeing the power of those first few hundred thousand people browsing the store for iPad apps.

Autodesk, maker of the SketchBook application for iPhone, has seen rampant demand for its new Sketchbook Pro iPad application. Some 10,000 units ha already been sold. Of course, that is not a huge accomplishment at a price of a dollar or so, but SketchBook Pro sells for nearly $8.

What does this mean? iPad users are not afraid of shucking out more coin for iPad applications than they perhaps once were for their iPhone software. A bigger screen seems to mean a higher price in the App store so far.

Of course, Autodesk spent more than $80,0000 presumably to build the application, so it still needs to break even, but it is a strong start for opening weekend.

What does SketchBook Pro do? It’s a sophisticated painting application that allows you to doodle in brilliant color. The advantage of this application over pens or a Wacom tablet is beyond me, but the market has spoken otherwise.

Look for more eye-popping numbers in the next few weeks as curious new iPad owners snap up apps left and right.

Read next: Google To Give Every I/O Attendee An Android Phone Pre-Conference