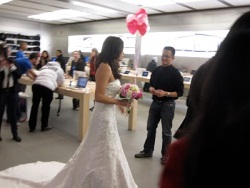 There have been some very unusual weddings filmed and uploaded to YouTube but this one is probably the geekiest. Forget the Halo wedding or the couple you watched update their Twitter and Facebook accounts as they tied the knot, this couple decided to recite their vows in the very place they met….an Apple Store.

Ting and Joshua had met when Ting was looking to buy an iPod, Joshua plucked up the courage to introduce himself and the romance blossomed from there.

Friends were in attendance at the Fith Avenue store in New York  to witness the ceremony which boasted a Steve Jobs-alike in full all-black attire. That man was Henry Hu, the “minister” who actually officiated the wedding using rings tied to 1st Gen iPod.

Apple didn’t sanction the event, as you can probably tell from all of the random people milling about perusing Apple products and filming with their mobile phones.

I bet there is nothing quite like getting married between a row of Macbook Pro’s and iMac’s. I doubt the couple even knew what their wedding music was. Let’s just hope they grabbed some AppleCare protection to safeguard any marital damage.

The “official” wedding video is embedded below.