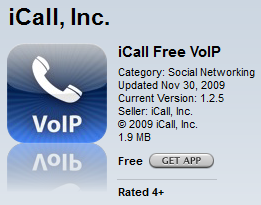 Apple and AT&T have long had odious rules as to just exactly you can do with your iPhone. One of the most frustratingly banned capabilities was VoiP over your 3G connection, thus blocking you from Skype on the go.

That is now changing, with the approval into the App Store of iCall, an application that does what we have so long desired: VoiP without WiFi on the iPhone. You can download the App here (iTunes link).

Of course, this raises numerous questions. When will Skype update its application to allow for this new capability? And of course, will this impact the availability of Google Voice on the iPhone in the long term?

However, moving away from the iPhone for the moment, how does this impact the iPad? Given that many of its future purchasers are expected to spring for the $30 monthly unlimited data plan, and assuming that Apple does allow this app to be used on both product lines, VoiP calling would be an option on your iPad.

Full calling ability via VoiP on your new device, bundled into your contractless data plan? Why didn’t they announce that yesterday? As a reality check, the iPad does have a microphone built in, see here.

Of course, one app into the App Store does a battle victory make.  Of course, AT&T actually lifted its ban on VoiP over 3G last year, this delay was purely an Apple corporate decision. Still, progress is progress.

Skype via 3G on the iPad would be great, but recall that you can only run a single application at a time. So, don’t get excited to look up that document while you talk.

Read next: The Google Tablet - It's Not What You Expect!