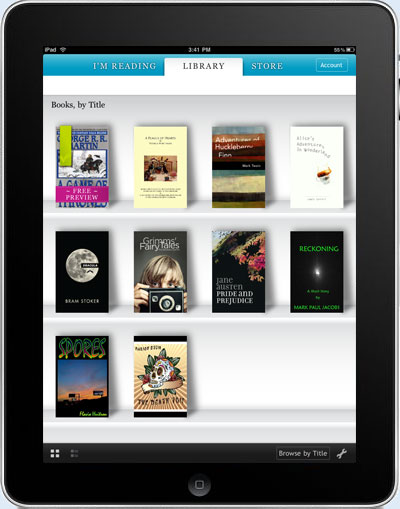 Well we’re nearly there, tomorrow (today?) in San Francisco we should have the official introduction of the Apple tablet.

We’ve all been waiting around, some twiddling our thumbs, others writing about it, a select few however, like young Polish student Patrycjusz Brzeziński, have set to work designing something I’m certain we’d all love to see in Steve Jobs’ hands within the next 24 hours. While he is likely to be glorifying his “most important” product ever (as he’s called it), just think how much cooler it would be to get something like Brzeziński’s MacView.

The MacView is his dream, a multimedia tablet with two touch screens.
I have seen a whole load of tablet concepts over the last few months, but this is certainly one of the best. Great work Patrycjusz.


Some initial sketches
Keyboard on the second touch screen
Above description says:
An ultralight personal computer which will display everything you need during the day. Wherever you are, you have your favourite books and text files with you. You will most certainly discover the magic of reading on this specially designed screen, which doesn’t cause eye-strain even in the darkest of environments.
Wherever you are, you will always have access to your resources in the WWW. You will be able to open movie files and listen to music. Designed for those on the move. Hundreds of functions make life easier in today’s contemporary cities. All this in the small-form factor MacView, which has a thickness of just 7mm.
Desktop with mini player music on second screen
PDF with thumb pages on second screen
MacView support, that solution reminds me one scene in Avatar

Box, so everything is packed right

Read next: Video Proof that new iPhone/Tablet OS could be called "iOS"