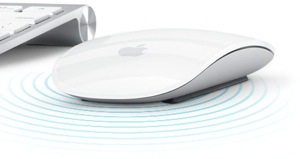 A fresh patent surfaced yesterday at the US Patent & Trademark Office detailing an advanced version of the Magic Mouse that goes far beyond simple multitouch capability.

Patently Apple immediately found and studied the material available, and it looks to be extremely promising. The mouse would get significant upgrades beyond simple touch sensitivity and laser-tracking. New functionality will include whole-mouse gestures such as tilt, tap, slide, scoop and brush, as well as force and motion metering.

Force metering would include normal force, shear force, frictional force, angular force, and any combined forces, while motion will be handled by one or more accelerometers, much like the current iPhone and iPod Touch.

Combined metering of this level can allow for countless potential combinations for gesturing, and the Magic Mouse as it is today is already noted for having a distinct shape that allows for easy handling. It’s easy to imagine a similar, if not identical model capable of advanced gestures — like tilting, brushing, and sliding.

Now if they’d just provide more multitouch gestures for the current Magic Mouse, without us having to resort to buggy third-party software…

Read next: China to Clinton: Back Off!