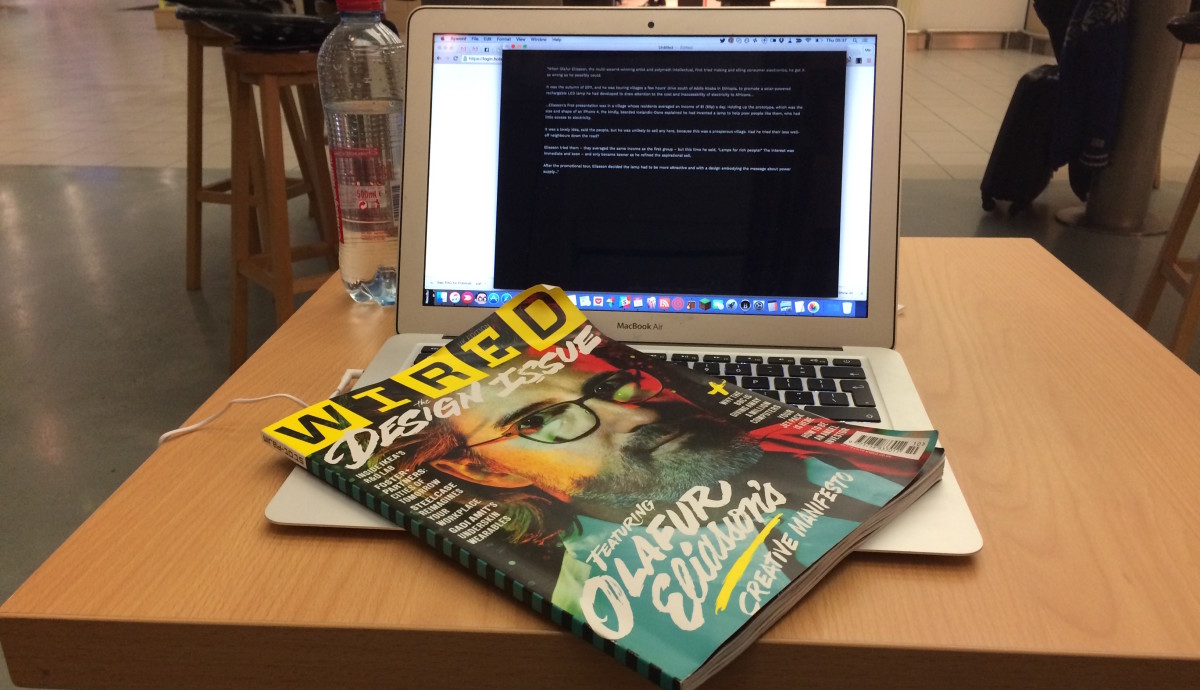 Wired has never met a cool white dude it couldn’t turn into a hero. It is essentially a fanzine about rich white guys and stuff that rich white guys like. That’s fine. You do you, Condé Nast. But sometimes it stumbles a little too far into excusing straight up idiocy.

That’s what I’m getting at here. Wired UK’s latest ‘Design Issue’ is excellent. It’s a really well produced magazine and there are lots of interesting articles in it.

However, the cover feature on Swedish designer Olafur Eliasson put my hackles up so fast, I was skittering across the floor like a pissed off cat.

Here’s the part that caused that – the intro in which we learn about Eliasson’s mission as a ‘white guy popping over to Africa to save it.’ Essentially, the Swede is Bob Geldof with a better beard.

When Olafur Eliasson, the multi-award-winning artist and polymath intellectual, first tried making and selling consumer electronics, he got it as wrong as he possibly could.

It was the autumn of 2011, and he was touring villages a few hours’ drive south of Addis Ababa in Ethiopia, to promote a solar-powered rechargeable LED lamp he had developed to draw attention to the cost and inaccessibility of electricity to Africans…

…Eliasson’s first presentation was in a village whose residents averaged an income of $1 (65p) a day. Holding up the prototype, which was the size and shape of an iPhone 4, the kindly, bearded Icelandic-Dane explained he had invented a lamp to help poor people like them, who had little access to electricity.

It was a lovely idea, said the people, but he was unlikely to sell any here, because this was a prosperous village. Had he tried their less well-off neighbours down the road?

Eliasson tried them – they averaged the same income as the first group – but this time he said, “Lamps for rich people!” The interest was immediate and keen – and only became keener as he refined the aspirational sell.

After the promotional tour, Eliasson decided the lamp had to be more attractive and with a design embodying the message about power supply…

This is all presented as a teachable moment, the enjoyable anecdote that lets us into Eliasson’s world. But that’s not what I see.

What I see is a white European who made assumptions about how Africans live their lives and was comprehensively schooled by them when he turned up with his technological solution to what he perceived to be their problems.

Back in 2011, the novelist Teju Cole provided the perfect encapsulation of why Eliasson’s actions and Wired’s implied veneration of them is so ridiculous. He was talking about the now ubiquitous idea of ‘first world problems,’ but the sentiment translates well. His tweets were pulled together in one place by Alexis Madrigal, then writing at The Atlantic:

I don’t like this expression “First World problems.” It is false and it is condescending. Yes, Nigerians struggle with floods or infant mortality. But these same Nigerians also deal with mundane and seemingly luxurious hassles.

Connectivity issues on your BlackBerry, cost of car repair, how to sync your iPad, what brand of noodles to buy: Third World problems. All the silly stuff of life doesn’t disappear just because you’re black and live in a poorer country.

People in the richer nations need a more robust sense of the lives being lived in the darker nations. Here’s a First World problem: the inability to see that others are as fully complex and as keen on technology and pleasure as you are.

One event that illustrated the gap between the Africa of conjecture and the real Africa was the BlackBerry outage of a few weeks ago. Who would have thought Research In Motion’s technical issues would cause so much annoyance and inconvenience in a place like Lagos? But of course it did, because people don’t wake up with “poor African” pasted on their foreheads.

They live as citizens of the modern world. None of this is to deny the existence of social stratification and elite structures here. There are lifestyles of the rich and famous, sure. But the interesting thing about modern technology is how socially mobile it is–quite literally. Everyone in Lagos has a phone.

Eliasson’s initially reductive view of Africa and Wired’s endorsement of it, come from the same school of thought as those who throw their hands up in horror at the idea that Syrian refugees own smartphones.

The smartphone is an information weapon. Just as AK-47s are cheaply made and distributed, the smartphone has become ever cheaper, ever more accessible. People all over the world are coming online through the mobile Web.

The smartphone is a phenomenal advantage. Some data and hardware that is good enough gives someone a tool to tell the world about their life, to push their lived experience beyond word of mouth.

We were touched, shocked and shook by the image of a young boy dead on a beach. Smartphones in the hands of refugees mean we will find it even harder to turn away – they are on the same social networks as you, they are sharing photos, sending messages, demanding to be heard.

Maybe next month’s Wired cover star will be a Syrian refugee. It’s certainly spent a lot of time talking about the son of a Syrian:

I seriously doubt it though.