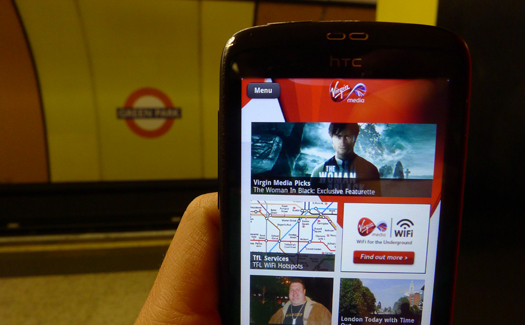 Being able to access the internet on the London Underground is a novel idea. For too long the tubes have been somewhat of a technological vacuum, stopping users from accessing their emails, tweets or favourite web pages.

Transport for London (TfL) has recently teamed up with Virgin Media to bring Wi-Fi internet access to the masses, with plans to support roughly 80 stations by the end of the summer. So far more than half a dozen are supported, offering a crucial glimpse at the full roll-out.

It’s not without its fair share of bugs and hitches though. When testing the service at Green Park last weekend, pressing ‘Activate Now’ on the screen did nothing. Refreshing the page and launching the browser again also had no results. Dropping out of the Wi-Fi hotspot and then rejoining? Nowt.

It took a reboot of our smartphone and numerous alternate email addresses to make the webpage finally budge. This wouldn’t normally be a problem, however by this point we had been standing on the platform for a good ten minutes. Less than ideal when you’re rushing into work or looking to catch that last train home.

Battling through the activation process yields some impressive results. The speeds are fast,  comparable even to most homes’ broadband access in the UK. Pages are quick to load and videos – even in high definition – rarely slow you down. It’s a pleasant experience and all too easy to miss the next half a dozen trains while you catch up on emails or Twitter.

Stepping onto the train is a whole other experience though. Between two W-Fi enabled stations – Green Park and Oxford Circus – there was no wireless connection during our test run. Internet access is therefore confined to the platform, escalators and ticket halls. A bit of a deal breaker if you need to take the Jubilee line from start to finish.

The Guardian has reported that from September, the ‘free’ service will be limited to only the Virgin portal and TfL travel news. Presumably, full access will then only be available to paying customers, or those who are already subscribed to Virgin’s other services.

The user experience questions the value and purpose of the scheme. Most commuters already refresh their emails, tweets and pages using a 3G connection before entering the London Underground. Is it that much more helpful to go through the same experience using a Wi-Fi connection once you’ve hit the platform five minutes later?

Obviously there are advantages if you’re locked into a restrictive data plan, or have a tablet device which is only Wi-Fi enabled. Superior speeds make streaming videos and downloading apps a cinch – although it will be interesting to see how the bandwidth holds up during the Olympics.

Until the service is rolled out onto the trains themselves, it’s a pretty limited service. The lacklustre registration process, coupled with the prospect of paying from September, will likely put the majority of commuters off. For now it’s just a gimmick – albeit a nice one.

Read next: Treasures at sea: Check out these vintage sailboat logos for design inspiration